Next Tuesday we're hosting a Masters of Social Gastronomy on taboo foods. We'll be talking about everything from cannibalism to, well, things like what you're about to read. It's free, and full of beer, so you might as well RSVP now.

Pythagoras! The very name should strike theorems into your heart. a2 + b2 = c2, to be exact. 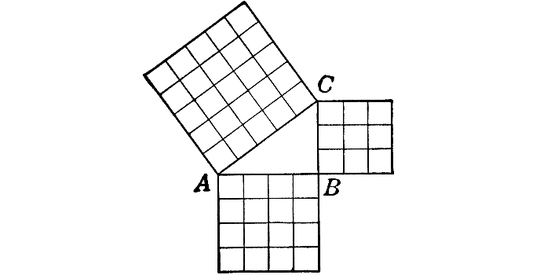 Pythagoras wasn't just some middle school math teacher hanging out in Greece, though. Mathematics was so central to his view on the world that Pythagoras spun out a whole cult devoted to his beliefs, the simply-named Pythagoreanism.

Pythagoreans held a whole host of super-secret and super-entertaining beliefs, but my favorite one is their take on vegetarianism. Not only did they eschew meat and fish, they also weren't allowed to eat beans.

No limas. No chickpeas. No gently spiced, slightly sweet baked beans. No beans at all.

The first and most reasonable explanation is beans have souls. Pythagoreans believed in all sorts of movement of souls between lives, people and animals. Beans grew up into healthy little bushes, and that propensity for life was good enough to put them in the "vegetarian" column.

That's the one everyone tells you, but we've got a few more explanations coming, mostly by way of Aristotle.

Beans look like testicles. And no one likes testicles.

Beans look like the gates of Hades. And no one likes going to Hades.

Beans make you fart. They are of a "windy and breathy nature," which is a further cue to the life force hidden inside.

Humans beings are made of beans. Pretty simple. We can even extend it a little, maybe, to "eating beans is the same as eating the heads of one’s parents**."

Beans smell weird. "A chewed bean placed in the sun smells of human semen or of murderously spilt human blood." I can only assume that's why we store them in a cool, dry place.

In short, beans are for murderous, cannibalistic, semen-and-testicle-loving Devil worshippers. And that, friends, is why you shouldn't eat them.

Be sure to tell your parents.

Learn more about taboo foods at MSG on October 30th!

** James Dye calls this one "frequently cited," but I sure as hell can't find another citation for it.

Taboo Foods: No Garlic, No Onions, No Nothin'

Knitting 1.5: The Purl Stitch (In Person)

Shibori: Block and Bind Dye Techniques with Indigo (In Person)

In Person: Tapestry Weaving for Beginners

Jan 29: Join us for a special watercolor coasters class!