I was looking around for something to bake in honor of Thursday's class "The Story of Milk & Cookies," when I realized I knew nothing about cookies or their history. Shall we explore a bit?

Let's start with the basics: etymology. Our American English word "cookie" comes from the Dutch "koekje," meaning "small cake." Bonus points for knowing -je is one of the ways to form the diminuitive in Dutch.1

The reason we Americans say "cookie" rather than using the British names - like "biscuit" or "tea cake" - seems to date back to the influence of Dutch immigrants in the colonies (like NYC) and our collective desire to be less British after the Revolution.2

If you're wondering how we got the word "biscuit," it's Latin. "Bis coctum" means "twice baked" and, yep, "biscotti" derives from exactly the same place.

So, where and when were the first cookies made?

It all comes down to sugar. The first cookies really were a very literal representation of their name--small cakes. They first appeared in what's now Iran in the 7th century AD, seemingly as "test cakes" used to figure out whether the oven was at the correct temperature for baking the larger version.

Sugar was common in the region by now, as the Middle East was one of the first areas to begin cultivating sugar after its "discovery" in South Asia.

As an aside: sweet, bready things arose as cooks experimented with new, richer ingredients. For centuries, they'd been making savory, plain crackers that traveled well on ships, but the availability of things like nuts and honey transformed these hard biscuits into something a lot more interesting.

Then, with the Crusades and the spread of Islam, sugar - and with it, cakes and sweets - made its way to Europe, the New World, and eventually to your mouth. 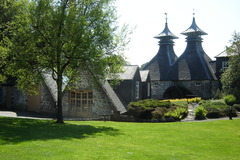 Finding the Right Fit: A Framework for Creating your New Career (ONLINE)