A couple weeks ago, we were the recipents of an awful lot of pickling cukes, thanks to our CSA's canning share.

Of all the kinds of pickles we ended up making (and yeah, there were a ton), I was most excited to turn these guys into new pickles - a lovely salty/crunchy/tangy pickle that's not too sour and not too sweet. I'm a big fan not only because of the taste, but because they are the laziest kind of pickle, and I'm a pretty lazy cook. The entire purpose of this post is to compel you to make them, even if you too are lazy.

Before we start cooking, let's break pickles down into two camps: (1) fermented and (2) unfermented, directly acidified. (This disctinction comes from On Food and Cooking.)

Fermented pickles make their own acid from bacteria - it preserves itself, but takes a while to get done. Directly acified pickles take a shortcut by, you guessed it, directly adding an acid, usually vinegar or wine, to the vegetable, thus quickening the preservation process.

In the context of our super limited discussion of cucumbers: fermented pickles are generally the ones you buy at delis (new pickles, half sours and full sours) while directly acidified pickles are the ones you find on a shelf at the grocery store (dills, bread and butters).

New pickles are my favorite because they involve the least amount of work - they're a fermented pickle without the wait. Truly fermented pickles have to sit around in a spiced salt-water brine for days (or weeks!), while directly acidified pickles need to simmer in a mixture of vinegar and spices to get the taste just right. If you hate waiting and/or cooking, new pickles are for you.

With new pickles, you stop at the first step - the salt water brine. They need little labor, no vinegar or sugar and no hot water bath. Amazing! You don't even let them sit on the counter to begin fermenting; they go directly into the fridge, which is great if you're worried about spoilage.

The one downside: you can't keep them forever and they've got to stay in the fridge, so you probably can't make 17 gallons of them at a time. But hey, can't win 'em all.

How to make them:

New pickles have been described as "hardly dunked in brine," which gives you a pretty good idea of how they taste. To make them, all you really need is salt water and some cucumbers mixed with spices.

For this batch, I used Linda Ziedrich's version. You make a salty water brine, then pour it into jars already filled with cucumbers, garlic, and pickling spices. 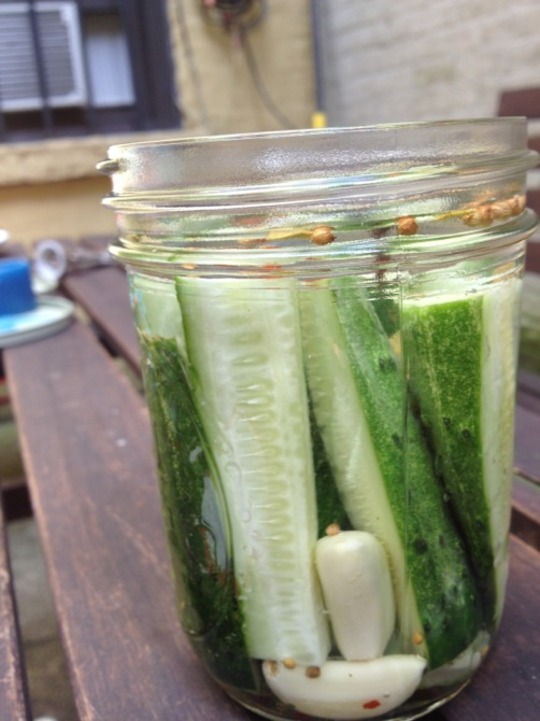 Then you put them in the fridge and wait a week. In the end, they're great; though, for reasons mentioned below, I'd leave the pickling spice out.

So why no pickling spices? They're generally a blend of warm spices - pepper, mace, cinnamon, cloves - along with mustard seeds, coriander, bay leaves and seemingly whatever else is kicking about. That's great for bread and butter pickles, but the warmth seems really out of place in a deli-style pickle.

As I mentioned, this recipe goes directly into the fridge, leaving no time for the cucumbers to ferment. If you're generally a fan of more sour pickles, you can let them sit out for anywhere between 12 hours and a few days. Keep tasting, and when they get as sour as you like, plop them in the fridge. The amount of time they're left to ferment at room temperature is what sets a new pickle apart from half sours and full sours.

That's really all there is to it. They're so incredibly easy that you should go straight to the kitchen and make them right now. Though if you're thirsting for some pickle esoterica, I'll leave you with the biggest, baddest post on fermented pickles in all the land: this gem from Chowhound.

You Should Read About: Wine, Preserving, and Grammar

Do What You Love: How To Start A Holistic Side Hustle - ONLINE CLASS