In keeping with my cooking nihilism, recipes are the devil's work, so we're going to talk you through a general idea of how to make a hot sauce and then leave you with some ideas for improvements and additions. That way you only get your kitchen dirty once and you end up with a half-dozen hot sauces.

So let's do this.

The most important part of hot sauce is the fact that it's hot. This heat is provided by our dear friends the chili peppers. Chilies are rated for heat on the Scoville scale, which sensibly enough goes from 0 to 16 milion. Paprika is around a 500, jalepeños are around 3,000, and habaneros around 100,000. These words and numbers mean "chilies are all different, like spicy snowflakes."

It doesn't matter what kind of chilies you use, because (a) it's your first try and you have no idea what you're doing anyway, and (b) you can always add other ingredients or water it down later! I'd suggest not starting off with eighteen habaneros and nothing else, though. 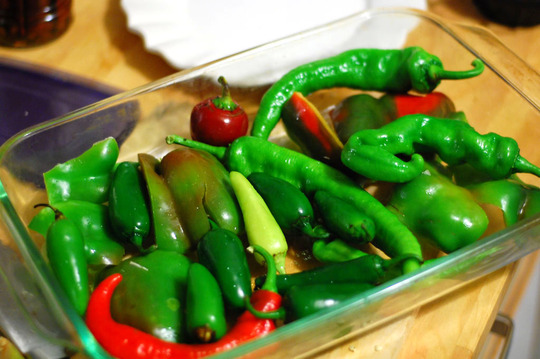 We used a combination of random chilies we picked up at the farmers market, and a couple habaneros from the grocery store. Please blame the insane greens on the 'Vivid' color option on my camera. To have plenty for experimentation you'll want about, you know, about as many as we have in that picture. A pound? Two pounds?

Your chilies can be either dried or fresh, each present their choices and own flavor profiles. If you'd like to spend some time googling, you'll find that dried Guajillo chilies have a berry flavor, or that chipotles are just smoked jalapeños, or that a lot of people really like chilies and will write many words about them.

For dried chilies, you'll want to toast them in a skillet first. Medium-high heat, one side for 20 seconds, then the other side for 20 seconds (or just keep flipping them around for a minute or two). You just want them to change color a bit. 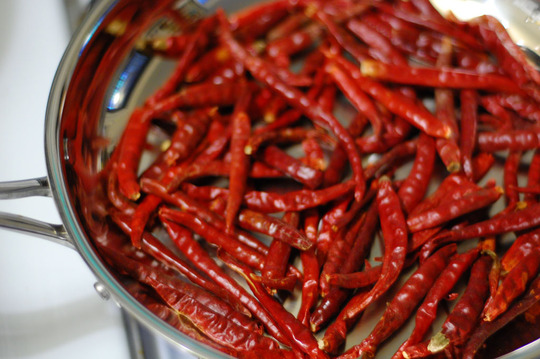 For fresh chilies, pop them in the broiler or toaster oven or normal oven on HOT and cook 'em until the skins blacken and blister a bit. This helps loosen up the skins and release more flavor. 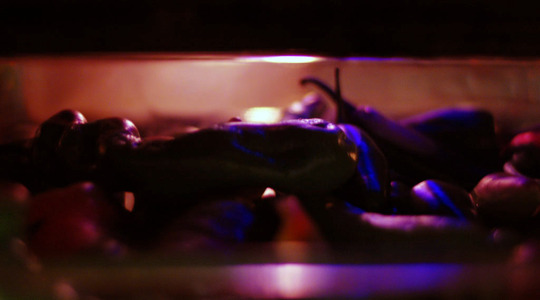 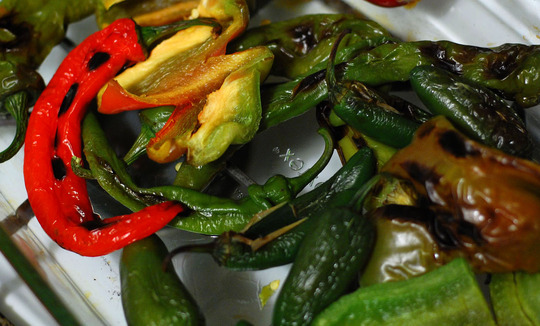 Some people are going to tell you to remove the skin, but I'm sure not. Who cares? You're going to be running these through a blender, save yourself some time and leave the skins on.

You do want to remove the insides of the chilies, though. Seeds + ribs = spicy spicy spicy, and that heat will quickly take over your concoction. Dried chilies are a lot harder to de-seed, so I just break them in half, give them a quick shake, and see what comes out.

Now that you've got your chilies prepared: blend them up! You'll probably need to add a little bit of water to make it blend well.

Well honestly, not every hot sauce has vinegar in it. Most of 'em do, though, and I'm going to recommend you start with a vinegar-ed one.

We used a lot of apple cider vinegar and white vinegar, mostly because you can buy them cheap in big bottles at the grocery store. Nothing screams "I know what I'm doing" like buying a gallon jug of white vinegar.

I don't know this firsthand, but I've been cautioned to stay away from balsamic and similarly strong-flavored vinegars, as the vinegar flavor takes over from the spicy flavor. That kind of sounds kind of ridiculous, though, because balsamic is awesome and a spicy one sounds absolutely wicked. Someone try this out and get back to us!

The ratio of peppers to vinegar is usually between 1:2 to 1:4, so if you have a half-cup of chilies go for one to two cups of vinegar. If you think that seems like a lot, try it with a 1:1 ratio, and when sight finally returns to your eyes you will realize that it is important to water that heat down.

ABSOLUTELY NOT A CHOICE: SALT

You're going to need to add salt. Add some salt. I don't know how many chilies or how much vinegar you're using, but if you enjoy numbers go ahead and add a quarter teaspoon. You'll probably add some more later, too.

Congratulations, you've now made a hot sauce base! Now you can make about seventeen different hot sauces using your chilies-vinegar-salt combo as the spiciness (or just keep it to those 3 ingredients, that's Louisiana style).

Now you might be getting stressed out now about other flavors to add to your hot sauce. How about two cloves of garlic? That's a good starting point, garlic works pretty well with chilies and no one is going to argue with you.

Here are some of the options we explored. 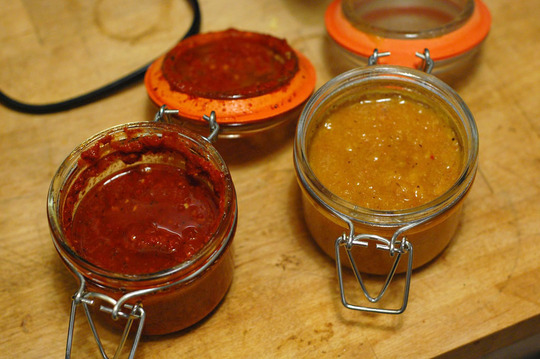 Peach: Base + two peaches, blended. The peaches weren't very sweet, though, so we added a little extra sugar. (right)

Sichuan: 1 tbl Sichuan peppercorns (grind your dry spices separately!), 1/2 tsp black peppercorns, some Chinese rice wine. I used boring red dried chilies for this, because that's what I always end up using when I'm cooking Sichuan food. They really do give a great color. (left) 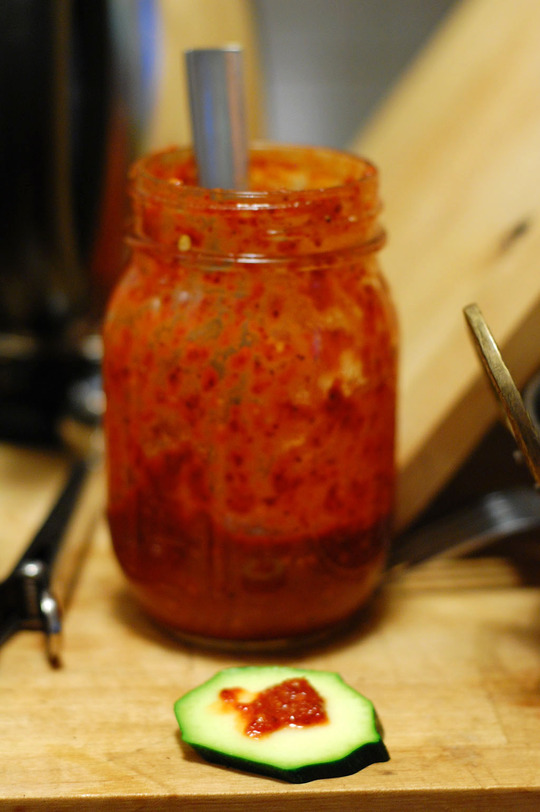 Tomato hot sauce: 3 broiled tomatoes + 1/4 cup red onion, blended. A little sugar, too. Probably used around 1/2 cup of the base. 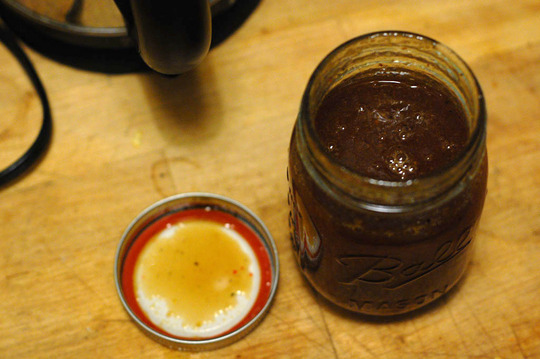 Thai sweet chili sauce: Lots of sugar, maybe 1:1 between the base and sugar. Add some more garlic, along with a general helping of fish sauce. Why is it brown instead of a pleasant clear? Maybe I used brown sugar. Oh and note: powdered sugar is great at dissolving compared to the granulated form. 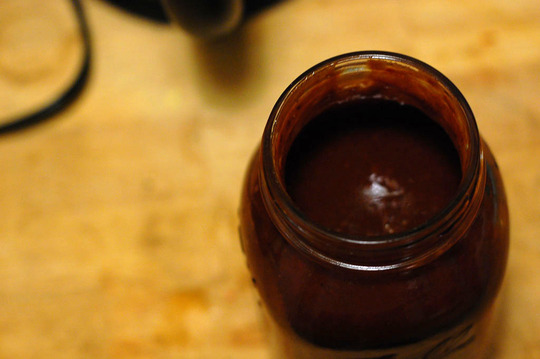 Faux-le: I don't know anything about mole, except that it has things like chocolate in it. We made a faux mole by adding chocolate, instant coffee, ground cinnamon, nutmeg, allspice, dried plums (who knew prunes got rebranded?) and a good amount of brown sugar. We also added a ton of water and vinegar to thin out the heat of the sauce, we really wanted the chocolate-and-fruit flavors to come through strongly. This probably doubled or tripled in volume as we worked on adding more and more to it.

Taste, taste, taste. Fix, fix, fix. Don't take it out of the blender until you're in love.

When re-seasoning, your first instinct will probably be to reach for the sugar, but instead you might want to water it down with more vinegar or water first. Then you can go for the sugar. I definitely erred on the side of too much sugar, and felt a little wasteful by adding so much vinegar. It isn't wasteful, though, it's hot sauce.

The sauces meld and mellow with time, and I promise it'll be a little less spicy the next day.

You can strain out your sauce if you want, although we didn't. Thick sauces are the best sauces.

These will last in the fridge for awhile, but if you're planning on canning, be sure to use a recipe specifically intended for that! Bear in mind this is vinegar and chilies, so if it ends up growing something inside you should probably take it over to NASA.

How to Freelance for Creatives (Online)