Okay, today we're starting a beer vinegar. You're probably familiar with malt vinegar, that fun thing that makes your fries soggy at the Chip Shop. That's made with an unhopped beer, but today we're using a homemade IPA (full of hops!) to make beer vinegar, so the finished product will likely be way more bitter, just like an IPA.

Note: this might turn out to be a huge disaster, but we won't know for four or five months. Hooray!

Are you sufficiently excited/scared to try this out for yourself? The recipe is super simple, but this is definitely the type of project where you can't follow a list of instructions and hope to get the same result every time you do it. You'll definitely need a sense of adventure.

The general idea is: 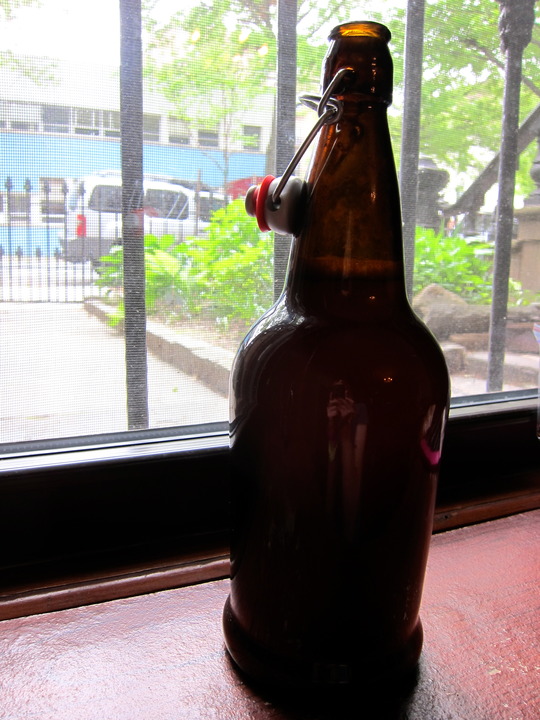 2. Add a vinegar mother. I'm using one from a bottle of Bragg's Apple Cider Vinegar, and frankly, it's pretty gross looking. You can see it lurking just below the surface in this photo, like some sort of creepy monster. 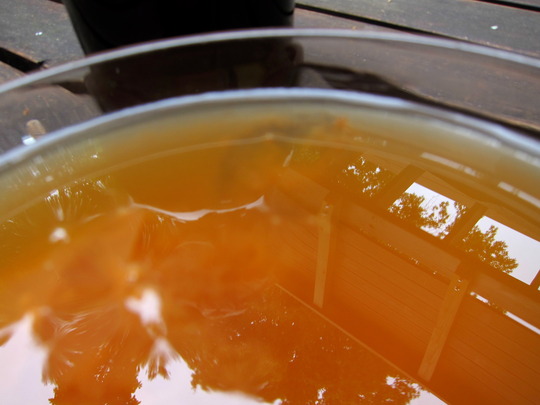 3. Loosely cover the opening of the bottle so you let air in (air's important!), but not other bad things floating in the air. I'm using a coffee filter over the mouth of the bottle.

4. Let is sit in a warm, dark place for a few months. Taste.

Like I said, this is sort of an art. One source says adding a vinegar mother didn't provide enough bacteria to turn the beer into vinegar, while another says you don't need to add a mother at all, that you can just let the air do its thing.

Okay, so now you've got a few months to bone up on the science of this whole process. Perhaps you're wondering what exactly is it in the air that turns this tasty alcoholic beverage into a pungent, tasty vinegar?

It's a little bacteria of the genus Acetobacter. There are lots of different specific kinds, but the important part is that they're one of the few things that use alcohol for energy.

These little guys take alcohol + oxygen (hence why your beer needs to be exposed to the air) and turn it into acetic acid + water (ie, your vinegar)

I haven't thought about chemistry for awhile, but it's actually a pretty simple equation:

Okay great, now you have your vinegar molecule: CH3COOH.

But! Acetic acid can exist in both its intact form, or disassociated. When disassociated, a hydrogen ion breaks off of the main molecule. As you might guess, this is H+ ion is why it's acidic in the first place.

These two forms (intact and disassociated) exist side by side in your food, but only the intact molecule makes its way up to your nose and gives you that characteristic pungent smell. In fact, foods that are acidic to begin with make vinegar smell even more because they let less of the molecules dissasociate. Add a basic ingredient (egg whites, say), and the odor of the vinegar will be reduced. Go science.

These bacteria live in the air, but also in your vinegar mother, which is why you added it in the first place. They're currently at work turning your beer into vinegar, but only time will tell if they've got enough of what they need to get the job done. If anyone else has tried this out, definitely report back!

(All of the science info is from that bible of food science, On Food and Cooking by Harold McGee. See also: http://en.wikipedia.org/wiki/Acetic_acid)

Where we go in Carroll Gardens