Last week, at our maple syrup class, we were perplexed by a very important question. Why did all the real maple syrup bottles have these tiny, useless handles?

You know the type: 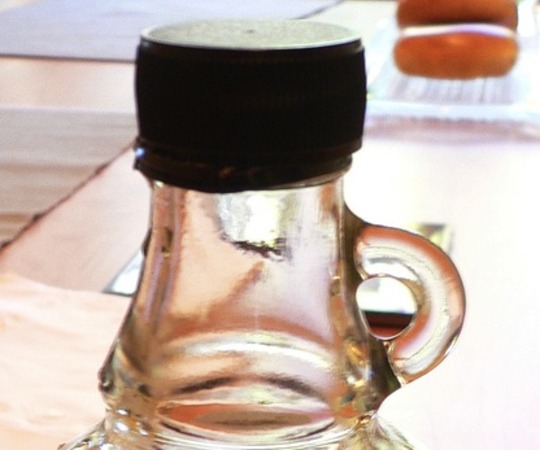 So, why go through the trouble of having these little handles when a smooth bottle would do the job just fine?

The internet's favorite answer is that the handles are a remnant from when most jars were large earthenware containers. The handle's useful when you're carrying five pounds of liquid, but not so much when you can easily grab the whole bottle in the palm of your hand.

Nowadays, through the magic of marketing and nostalgia, tiny handles = real maple syrup to all of us, and companies keep putitng them on the bottle.

The tiny handle is an example of a skeuomorph, which is not only a fun word to say, but a really neat little piece of vocab.

Defined as "A retained but no longer functional stylistic feature," skeuomorphs are found all over the place.

They're the type of thing that was essential when an object was made in its orginal material, but over the years have been retained as merely a design element without any real function.

Wikipedia has a fun list of other skeuomorphs, which include things like the brass rivets on your jeans, which only conceal more functional steel rivets, or spokes on hubcaps that recall old timey wheels which really did need spokes. Even the fluting on Greek and Roman columns is rumored to be a hold over from the days when trees were used to support roofs and beams, rather than stone. The fluting on the wooden columns helped with drainage and made the columns stronger, but were retained even after the transition to stone.