You probably know saffron as expensive red threads from Spain, sold in tiny, tiny containers at specialy stores and used to color and flavor paella. Its threads are picked from a type of crocus, the crocus sativus, and the painstaking nature of its harvest has led to it being known as "the world's most expensive spice." And, if you're anything like me, you may not have actually used it much; given that it's so pricey, saffron can almost feel a bit too precious to use regularly.

That's why I was so excited and surprised to read about the wide-ranging use of saffron in Pennsylvania Dutch cooking in an article by Mark Ibold for Lucky Peach, and to discover that saffron is still grown in Pennsylvania by a handful of people. German and Swiss immigrants used saffron back in Europe and brought the bulbs with them when emigrating to Pennsylvania. Though its use in the area is not quite as widespread as it once was, saffron still has quite a following in the area and is used in everything from pot pies to cookies.

The last commercial saffron farmer, Richard Martin Keen, retired several years ago, but Pennsylvania saffron can still be found if you look hard enough. It's also supposed to be quite good, according to a 2001 taste test in Cook's Illustrated.

Thanks to Twitter, I found it was available at the Lancaster Mennonite Historical Society. We picked up a bunch of $5 jars that were grown in Ephrata, and though I haven't used any yet, it sure is lovely: 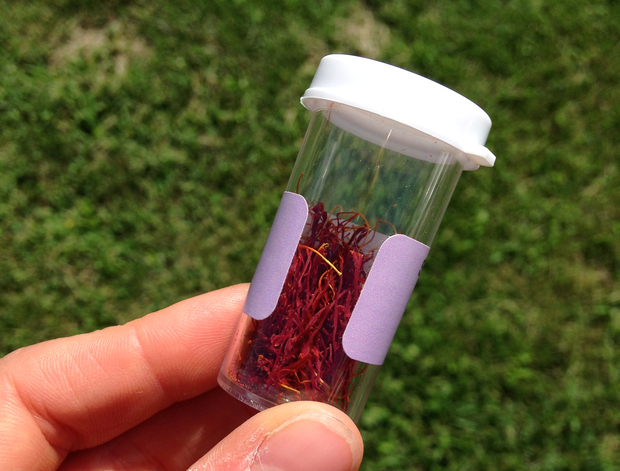 I've also created a Google map showing some of the locations mentioned in the stories. Exact addresses aren't used for personal homes; this is more to give a general idea of the area.