This is a course preview for A Million and One Soy Sauces, which happens tomorrow (Thursday!). Turns out there's a lot more than just Kikkoman - and we'll be working our way across Asia to see what exactly each is for. Many dumplings and veggies will be consumed in the process.

This post is about the worst kind of soy sauce. The best is a secret for the class!

Back in the olden days, everyone made soy sauce pretty much the same way. Throw some cooked soy beans (and maybe some wheat) into a vat, wait a while for the mixture to ferment and voila! Soy sauce.

The problem was always the "wait a while" step - we're talking 9 months to several years of sitting around, waiting for the mixture to fully ferment. You needed the fermentation to break down the soybean's natural proteins into smaller, tastier amino acids.

Just imagine you're running the proteins through the world's slowest Slap Chop.

These amino acids lend soy sauce umami, the savory flavor you get from a good soup stock (or MSG!). Without waiting out the fermentation you have fewer amino acids, which means less of that delicious flavor.

Around the 1920's, though, we figured out a shortcut. What if we could make soy sauce without waiting, but also without any soy at all? 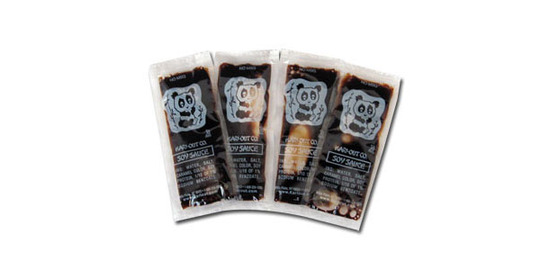 Soy sauce for an Industrial Era

Instead of waiting for nature to break down the proteins, we figured out how to do it through the powers of Science! Introducing acid-hydrolyzed vegetable protein.

First, pop a bunch of vegetable protein in a vat. Grains, soy, whatever you have handy. Add some hydrochloric acid and let it boil for a day or two.

The heat and acid have broken down the proteins into amino acids! Now you've got a fat full of very umami-ful acid.

You do not want to put this on your rice (yet). Acid death, you know. Next up, add a super strong base like sodium hydroxide. This neutralizes the acid, so you're now left with a sludge of amino acids. Kinda like soy sauce, right?

Exactly like soy sauce, according to the FDA. Even though it has pretty much nothing in common with traditionally made soy sauce, it can be labeled just the same.

Where can we find offenders?

Let's take a look at Kikkoman's ingredient list: Water, salt, soybeans, wheat, high fructose corn syrup, rice, alcohol to preserve freshness. Yes, HFCS is in everything these days, but at least they're generally sticking to the "salty soybeans and wheat" tradition.

Pretty much all of the tiny packets of soy sauce you get at Chinese restaurants use this shortcut, too.

It isn't just an "American thing" either - because it's so much easier to produce you'll find it all over Asia as well.

But if it's just amino acids we're after, why is acid hydrolysis bad?

I have nothing against science! It's great, especially when it comes to food, but you're shortchanging yourself if you use anything in the La Choy realm.

There's a lot going on when you ferment soy sauce beyond the simple chopping up of proteins. Mold, yeasts and bacteria all coexist during the fermentation process, each strain leaving their specific mark on the sauce's final flavor.

Soy sauce is a lot like whiskey - from brewery to brewery you'll get a different taste thanks to the local microflora. Acid hydrolysis might get us part of the way there, but for a couple quarters more you'll get a much better product!

Artificial vs. Natural: When Flavors Collide (An MSG Recap!)