I've always been a little obsessed with Brooklyn's six original villages; these towns were the first European settlements, mostly Dutch, in the 17th century, and they were spread out all across the now sprawling borough.

The six--Flatlands, Brooklyn, Bushwick, Flatbush, New Utrecht and Gravesend--all have interesting histories, and you can still their remnants in the way their original streets disrupt the current street grid, but I've always been especially fond of Gravesend.

It was settled in 1643 by Lady Deborah Moody, known to be the first female landowner in the New World, as well as just generally awesome. Moody was British, and Gravesend is actually the only British town of Brooklyn's original six, the rest being Dutch.

An Anabaptist, she left England to escape religious persecution, only to be less-than-welcomed by the Puritans in Massachusetts. She established Gravesend with a commitment to true religious freedom. During its construction, some fights with Lenapes in the area caused her to consider returning to Massachusetts, but one official wrote to John Winthrop advising that she should not be allowed back, calling her a "dangerous woman."

Winthrop himself described her as such:

"With the exception of her troubling the church with her religious opinions, she appears to have been a lady of great worth."

Lady Moody's long gone these days, and Gravesend isn't quite the agrarian town it used to be, but it's still worth a visit if you're interested in some of Brooklyn's oldest history.

You can bike out along Ocean Parkway or take the F to Avenue U, which should plop you right on top of the orginal grid. It's loud, with elevated trains running over the original village, but you can still see the cemetery and get a feel for the street grid as it existed way back. 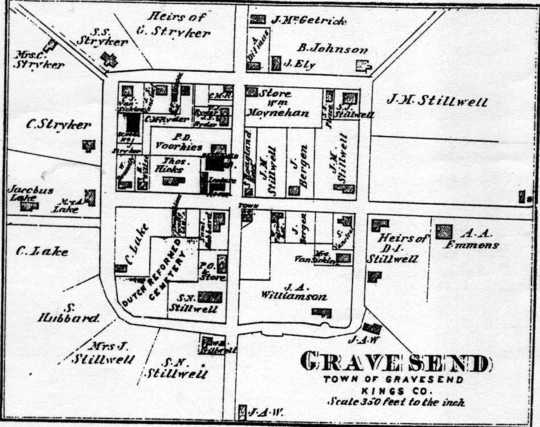