This semester's class on the history of Downtown and Brooklyn is taking on a motley (you could say random) group of neighborhoods during our four weeks.

Partially this is because there's just way too much stuff to learn about in four 90 minute meetings; partially it's a way to try and fit lots of topics in, and partially it's an excuse to do lots of the stuff I've been meaning to do and see since I moved here.  Since there's no unifying theme to our exploits, this seemed as good a time as any to recap some of the stuff we've done.

Before class started, I biked out to the city's oldest building - the Pieter Claesen Wyckoff House in Flatlands. It's pretty awesome and extremely old (1652!) but also kinda small and unassuming.  It's got a super cute park and some nice gardens surrounding it, but there's also a tire shop next door and a McDonald's next to that. There's no train nearby and it's a little out of the way, but that's also what's sort of neat about it.  The best part about the Wyckoff House is that it just sort of blends in to the city, and it kinda feels like this secret thing when you find it.

Best fact? All the Wyckoffs in the world (50,000 of them!) are descended from this family, since it was the first time the surname "Wyckoff" had been used. It means something like "town magistrate" in Dutch. Also they have some really old waffle irons there and corn cobs in the walls for insulation. Neat.

Last week we were super lucky to take a walking tour of Crown Heights with a neighborhood expert.  We started at the site of another old farm (maybe farms are the theme of the class?!), this one right around the corner of Nostrand Ave. and Macon Street in Bed-Stuy.

We wandered and walked all over the neighborhood, but easily my favorite building was this rambling structure on the corner of New York Ave. and Park Place. It's seriously huge, like half an avenue long. It's the kind of building you stumble upon and makes you feel like you're not in New York anymore. It's a school now, and you can't go in or anything, but it's totally worth the trip just to gawk at it a bit.

This week we met over in the East Village (yep, a farm too) to meet with a local artist and talk a bit about Tompkins Square and the neighborhood. Tompkins Square was never a farm, just a swamp that's had a long history of protests and the occasional riot.

The most infamous riot in Tompkins Square happened in 1988, when the city began enforcing a 1 a.m. curfew in the park after noise complaints started rolling in. A protest of the curfew drew lots and lots of cops to the scene, and eventually things got violent, lasting until dawn. It's another one of those things about New York that's hard to imagine when you see the place today.

Next week's our last class (skyscrapers!), after which I promise some random facts about very tall buildings.

Intro to Data Analysis with Python (In Person) 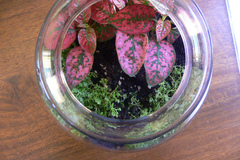 In Person: The Woodland Terrarium