I've long loved Baked Alaska, that very old-school combination of cake, ice cream, and meringue toasted to a crisp, but I'd never thought about its history before Victoria of Edible History mentioned it during her talk on the history of the restaurant in NYC.

I was surprised to learn the dish was much older than I'd imagined, having been in existence since at least the 19th century. And though its exact origin is unclear, it was popularized by the chef at Delmonico's, Charles Ranhofer, in the late 1800's. A version is featured in his 1894 cookbook, The Epicurean, under the (much better) name "Alaska Florida." The name let you know there would be extremes of temperature hidden inside the desert, both the hot, toasty meringue, and cold ice cream once you sliced in.

If you're hungry or looking to wow some dinner guests with some old-school charm, you can whip up Ranhofer's version using his very own recipe: 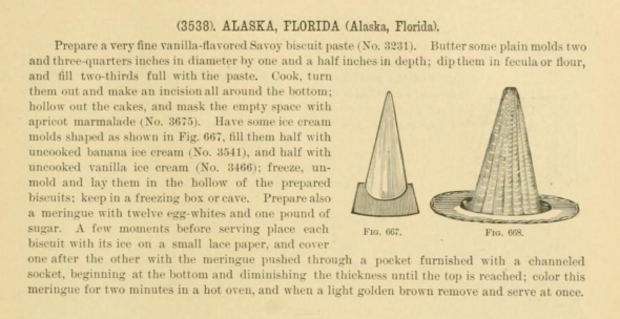 or, if you're looking for something a little more modern, try Alton Brown's Baked Alaska recipe.

← Online Classes from Collage... DIY Classes for the Holidays →

On the Outlander Trail: the History of the Jacobite Wars (Online)

Herbs for Clarity and Focus (Online)

In Person - How to Meditate: An Introduction to Mindfulness