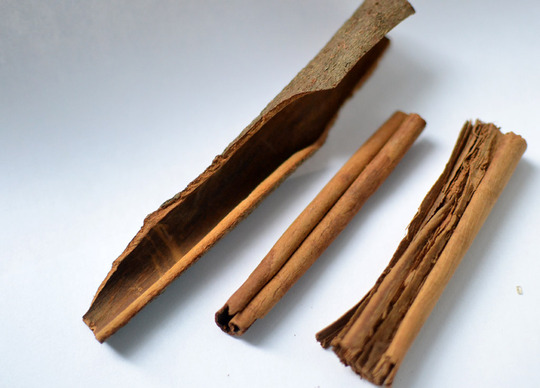 You know that nice, powdered cinnamon that you get in the grocery store? Those wonderful studies that promote the Super Amazing Health Values of eating a bunch of cinnamon? The sticks that come in those big ol' jars? You don't know it, but those are three different cinnamons.

In fact, the first one (powdered cinnamon) is so not cinnamon that is has another name - cassia. Cassia is the big beast on the far left, and it doesn't take much imagination to connect it with the bark of a tree. It's fragile and unbendable, which is why it's ground up to make "powdered cinnamon." Also known as Chinese cinnamon, it comes... from China.

The amazing health benefits of cinnamon belong to Ceylon cinnamon, the most expensive of the three. It's the one on the far right, and one that you rarely see in the US except for in specialty shops. It has the highest essential oil content, and is therefore the most fragrant and tasty. Also known as Sri Lankan or "true cinnamon" (even in the Latin! Cinnamon verum!). I buy mine at Brooklyn Home Brew; don't ask me why a brew shop has ultra-nice cinnamon, I'm only reporting facts.

The final entrant is Indonesian cinnamon, which is the pleasant-looking quill in the middle that you find floating in your hot toddies. Despite its well-formed curl and even coloring, it has the lowest essential oil content of the three, and is therefore pretty much crap. Granted, I'm sure ground cinnamon that's been sitting on a shelf has lost some of its potency, but at least now it makes sense as to why chewing on those sticks isn't a popular pastime.

I really wish the internet would tell me exactly what the essential oil is that's in cinnamon, I'd feel a lot better about myself if i knew.

The Secret of Three Cinnamons