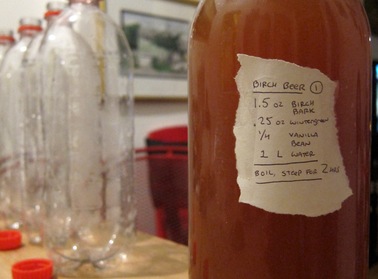 So we did our Ginger Ale Workshop and a ton of you walked away with a bottle of ginger ale and a new found appreciation for the art of soda making. Let's rock this boat a little harder with some 2-session classes that cover how to mix up a batch of pretty much any type of soda at home!

We'll start with ginger ale, but that's honestly child's play compared to some of the stuff out there. We'll brew up some root beer - sarsaparilla, sassafras, birch bark, licorice root, and more - it's basically turn of the century mad science. We'll go over the history of different major types of soda and what gives them their magic.

We'll also look at syrup making, and how starting with a little sugar and water you can coax just about any flavor into a batch of soda. Blueberry-lemon, fennel-orange, fresh rhubarb - you won't need to be restricted to whatever Pepsi subsidiaries are offering!

Yeast! Carbonating soda at home from scratch is a lot like brewing, and you can lean on the same sort of lessons that homebrewers deal with when whipping up a batch of beer. We'll also have some tips handy for people with that just-about-magical SodaStream machine, which takes care of the carbonation step for you.