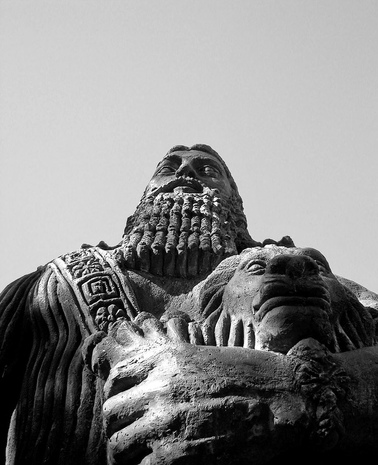 By Samantha from Indonesia (Gilgamesh) [CC BY 2.0 (http://creativecommons.org/licenses/by/2.0)], via Wikimedia Commons\

*This is a live, online class via Zoom. Link will be sent the day before the talk.*

Mesopotamia, the ancient “Land Between Two Rivers” in present-day Iraq, was home to many different gods. Though less-well known today than the pantheons of Ancient Greece, Rome and Egypt, the gods of Mesopotamia had just as many grand adventures, big personalities and poignant observations on the human condition. We know them today thanks to a rich ancient literature, including the famous Epic of Gilgamesh, the first example of written epic poetry in world history.

In this class, we’ll meet the most important gods of Mesopotamia: tempestuous Inanna (the original femme fatale), wise Enki, monster-slaying Ninurta, and many more. We’ll hear the story of the great “two-thirds divine” hero Gilgamesh and uncover the original context of familiar names like Ishtar and Lilith. We’ll also learn about how these gods were worshipped, and how their worship affected history, up to and including the modern world.

This class is a general introduction to the myths and legends of Mesopotamia. No previous knowledge of the subject matter is required!