How to Meditate: An Introduction to Mindfulness - ONLINE CLASS 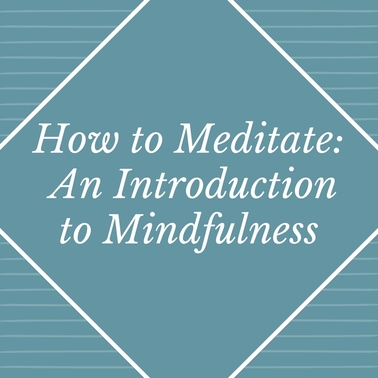 One of the best things I've ever done for myself was learning to meditate and create a daily mindfulness practice. Mindfulness Meditation helps me rebuff the jerk in my head who encourages me to make bad decisions; with a daily practice, I'm now able to sift through my thoughts so I'm (mostly) acting on the good ones, not the bad ones.

In this class, you'll learn the basics of starting a personal meditation practice. I'll teach you how to relax your mind, sharpen your concentration, increase calmness and clarity, and induce sustainable, conscious happiness. Most importantly, I'll provide you with tools to reduce stress and anxiety, and become more resilient.

This class is open to anyone who wants to learn more about mindfulness, whether you've meditated 100 times or 0. I'll address the basic barriers that many beginners face, such as: How long do I meditate? Where should I meditate? What do I focus on? How do I overcome distractions? The workshop will include some guided meditations and provide plenty of time for questions and discussion.

You will walk away with the ability to: