Gifts of the Sun: The Cuisine of the Aztecs - ONLINE CLASS 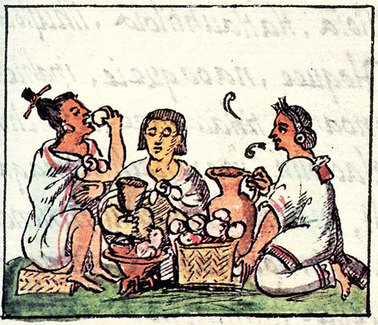 *This is a live, online class via Zoom. Login info will be sent the day before the talk.*

When the first Spanish conquerors arrived in present-day Mexico in the 16th century, they were astounded by what they found. The cultural achievements of the native peoples of Mesoamerica rivaled anything back in Europe: there was great architecture, great literature, and yes, great food.

Despite lacking large domestic animals, the Aztecs developed a rich cuisine that dazzled outsiders with its variety. Since the Spanish conquest, crops first grown by the Aztecs have spread to the tables of the world: corn, chili peppers, tomatoes, avocado, and chocolate, to name a few. Original Aztec recipes like tortillas, tamales and guacamole have accepted new influences as they developed into the national cuisine of Mexico.

This class is a celebration of the ingenious foodways of the pre-conquest Aztecs. We’ll learn about the Aztec diet and the cultural beliefs that shaped how the Aztecs viewed their food. We’ll also taste a few Aztec recipes, like a corn-based beverage and a “superfood” harvested from lakes.

This class is a general overview of food history, with samples. No previous knowledge is required!