From Planet Krypton to Printed Page: An Insider Look at How Comic Books Are Made 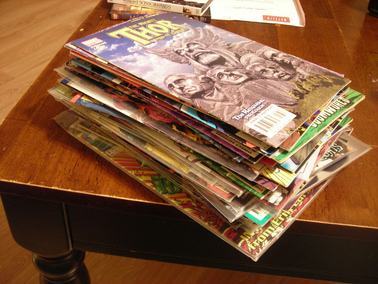 Sven is a funny book industry veteran with over 20 years experience in the business. He began his career at Marvel Comics, where he eventually ran the marketing and creative services departments (yes, the glow in the dark GHOST RIDER cover was his idea). In addition to Marvel, Sven has also served as the publisher of Teshkeel Comics (creators of the world’s first Muslim superheroes) and freelanced for Dynamite Entertainment, Crusade Entertainment, Event Comics and many more. He is remembered fondly by his fellow Canadian comic book fans for his epic two issue writing stint on Marvel’s ALPHA FLIGHT comic as well.

In his day job, Sven works as Chief Marketing Officer for Zemoga, a digital advertising agency. Sven lives in Park Slope, Brooklyn with his wife Monica and his dog Gia (who has chewed up just about everything in their house except his comic books).

Do you fancy yourself the next Stan Lee or Chris Ware? Got the next WATCHMEN or GHOST WORLD in your head and don’t know how to get it out? Or do you just want to learn more about one of America’s only indigenous art forms? Then From Planet Krypton…is the class for you.

Marvel Comics veteran Sven Patrick Larsen takes you through the complete creative process, from initial concepts and character designs through the technical aspects of coloring and lettering to the nitty gritty details of finding a printer or distributor. Along the way, he’ll share personal anecdotes of his over 20 years in the comic book business, provide advice for aspiring professionals, and explore some of the exciting new ways creators can get their four color creations exposed to the reading public.

Trust us, after this class you’ll never look at SPIDER-MAN the same way again!

Students are encouraged to bring their scripts and artwork but no experience necessary!