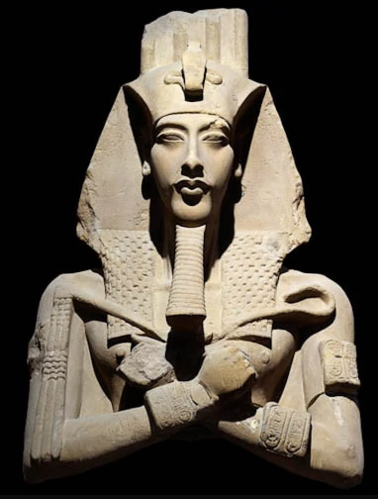 *This is a live online class via Zoom. Link will be sent the day before the talk.*

Across the millennia-long history of Ancient Egypt, one pharaoh stands out from the rest.

Where Egypt's other rulers maintained the status quo, Akhenaten challenged it. Abandoning the many gods of Egypt for one little-known deity, he changed his kingdom's religion, capital city, and even style of artwork, commissioning humanizing portraits like nothing before or since of his family relaxing in natural poses. Some members of that family would top any modern list of the most-famous Ancient Egyptians, like Akhenaten's wife, Nefertiti, or his son, Tutankhamun. Yet the unorthodox pharaoh himself is still shrouded in mystery; not least because his successors attempted to erase him from the record entirely, even replacing his name with "that criminal," "the enemy," and "that damned one."

This class tells the story of a strange and captivating moment in Egypt's history, when, at the height of its power and influence, it came under the rule of an iconoclast who broke with tradition at every turn. We'll meet the unique pharaoh himself and his large and fascinating family, including the best-documented women in all of Egyptian history. We'll learn about their god, hear their poetry, and consider some of the many theories surrounding their downfall.

No prior knowledge of Ancient Egypt is required!