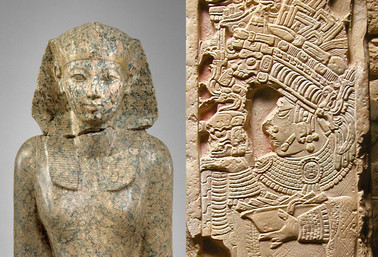 Tweet
This is an old class! Check out the current classes, or sign up for our mailing list to see if we'll offer this one again.
An evening about the stuff you should have learned in school, but which apparently got left out because it was just too much fun (also, sexism)!

In this lecture, we’ll talk about five women rulers of the ancient world. We’ll get into how gender roles worked in different societies, the multiple ways women were able to claim power, and how traditions of feminine leadership have shaped not just our past, but our future. Come to hear more about:

Enheduanna (around 2300 bce): A high priestess in Ancient Mesopotamia and the daughter of Sargon I, she helped her father to consolidate his hold over rebellious regions in the world’s first empire. Plus, she’s the oldest known author!

Hatshepsut (1507-1458 bce): A pharaoh of Ancient Egypt, she was one of its most successful rulers, excelling in the fields of trade, economics, and building. After her death, her successors attempted to hide her rule, nearly succeeding in erasing her from history.

Himiko (around 200 ce): A shaman and queen of early Japan, she united multiple warring communities and maintained power through her seemingly close connection to the gods. Her reign may be misremembered in stories of the legendary Empress Jingu.

Lady K’abel (late 600s ce): A queen of the Maya city of El Perú, she played an important part in the struggle for power between two feuding dynasties by leading armies and taking captives. She, and not her husband, was given the title Ix Kaloomte’, which translates to Supreme Warlord.

Mandukhai (1449-1510 ce): She raised the only surviving descendant of Genghis Khan – and then married him as a way of maintaining her control over the Mongol Empire. A fierce fighter, China expanded the Great Wall to protect itself from Mandukhai.

March is Women’s History Month, so it’s a wonderful time to learn more about the kick-ass women of the past. All genders are welcome, and no prior knowledge of history is needed. Whether you're looking for personal inspiration, historical context, or just a fantastic edge at trivia night, this class is waiting for you.