Walking Tour: The Insalubrious Valley of the Newtown Creek 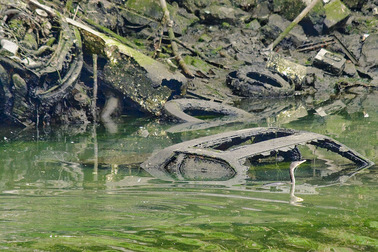 Join Newtown Creek Alliance Historian Mitch Waxman for walk through the industrial heartlands of New York City and along the Newtown Creek. Following the currently undefended border of Brooklyn and Queens, we will be exploring the colonial, industrial, and environmental history of the borderland communities. We will encounter century old movable bridges, visit the remains of a 19th century highway, and explore two of the lesser known tributaries of the troubled Newtown Creek watershed. For the vulgarly curious, Conrad Wissell's Dead Animal and Night Soil wharf will be described.

Meet up at the corner of Grand Street and Morgan Avenue in Brooklyn. https://goo.gl/maps/t5cZkZhJ48R2. The L train stops nearby at Bushwick Avenue and Grand Street, and the Q54 and Q59 bus lines stop nearby as well. Check MTA.info the morning of for last minute transit changes.

Be prepared for rough terrain and possible heavy truck traffic. Dress and pack appropriately for hiking and hot weather. Closed-toe shoes are highly recommended. Bathroom opportunities will be found only at the start and end of the walk.