Walking Tour - DUPBO: Down Under the Pulaski Bridge Onramp 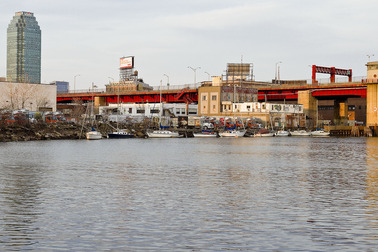 Join Newtown Creek Alliance Historian Mitch Waxman for an intense exploration of Newtown Creek's Greenpoint and Hunters Point neighborhoods, walking along the East River and over the Newtown Creek.

A colonial center and 19th century industrial powerhouse, Greenpoint is a thriving neighborhood cursed by environmental catastrophe. Explore this ancient North Brooklyn neighborhood, and learn its incredible industrial history, while moving inexorably toward the Newtown Creek. The tour will cross Newtown Creek via the Pulaski Bridge and head into the brave new world and Modern Corridor of Long Island City's Hunters Point. There will be spectacular waterfront vistas to enjoy, maritime industrial and rail infrastructure to marvel at, and along the way - a few surprises will be encountered.

The areas we will be moving through will be, and are being, completely altered by real estate development. Come take a look at what was before everything changes.

Meetup at 11 a.m. on Saturday in front of St. Anthony's RC Church on Manhattan Avenue at the corner of Milton Street in Greenpoint. https://goo.gl/maps/8URmxrVSNts

Check MTA.info, the morning of, for best transit directions to get there. We will be ending the walk in Long Island City. Bring your camera, as the tour will be revealing an incredible landscape along this highly populated section of the troubled Newtown Creek Watershed.

Be prepared for rough terrain and possible heavy truck traffic. Dress and pack appropriately for hiking and for weather. Closed-toe shoes are highly recommended. Bathroom opportunities will be found only at the start of the walk. We will be ending in LIC, nearby several mass transit hubs.