The Braveheart Legacy: The Scottish Wars of Independence (Online) 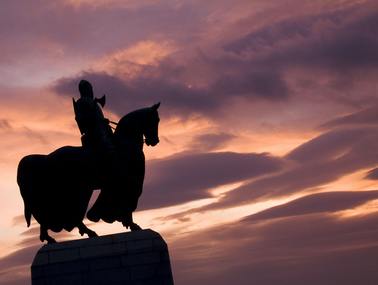 As a small county on the edge of Europe, Scotland has always had to fight for her survival.

Over the last two thousand years we’ve repelled invaders and tyrants, from the Danish Vikings to the might of Imperial Rome. But, without question the most important fight, the seminal moment for Scotland was in our struggle against the English kings Edward I and Edward II from the closing years of the thirteenth century to the famous Battle of Bannockburn in June 1314. This was the war in which heroes like Robert the Bruce and Braveheart’s William Wallace were forged, but there was more, much more to this story than a simple war for freedom, so many characters and unscripted twists and turns along the way.

The Scottish Wars of Independence created the nation of Scotland, carving her from a medieval backwater kingdom to the top-table of European countries; it has defined our history, and continues to inform and shape both our sense of place, and indeed our very psyche. So, join me on an incredible journey through these pivotal, blood-soaked years, where usurpers were toppled, warriors rose, and a nation was born.