PIECE BY PIECE- the Mosaic “Selfie” (a collaboration with UrbanGlass) 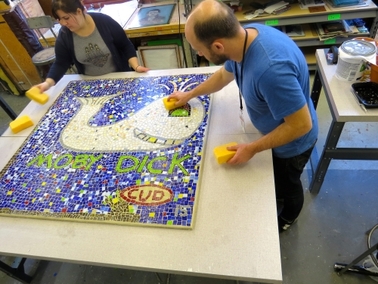 John Drury lives with his wife and children in Brooklyn, NY. John earned his Bachelor of Fine Arts degree from the Columbus College of Art and Design in 1983 and a Master of Fine Arts degree in sculpture and painting from the Ohio State University in 1985. John is a founding trustee of Glass Axis (1987) a not-for-profit public access glass facility, recently celebrating their 25th year and located in Columbus, Ohio. He is also half of the artist collective CUD with Robbie Miller of Vancouver, a collaboration founded in 1988 that continues today.

Mr. Drury has exhibited nationally and internationally over a long career in the arts. The critic John Perreault writes in reference to an exhibition for Glass magazine (#60), “Drury has a storyteller’s gift for combining unlikely objects as though they were a string of events in a daydream”. Mr. Perreault continues, “he is a mixed-media sculptor/provocateur” and “Drury, to my mind, is a true poet of the material world. He is a trickster rather than a prankster; an urban shaman”.

In this collaboration with UrbanGlass we will all look to ourselves as inspiration for artwork. Artist, writer and educator John Drury takes us on a voyage of unique creativity with a short historical presentation of examples from untrained artists who incorporate mosaic into their creations, including Sabato “Sam” Rodia’s Watts Towers, Fred Smith’s Concrete Park, Q. J. Stephenson’s Occoneechee Trapper’s Lodge and the Paul and Matilda Wegner Grotto.

This brief lecture will serve to inspire a creativity sparked by your own environment, personal experience and concerns which will be funneled into a hands-on mosaic project. Your mosaic “selfie” need not be regulted to mirror images of yourself, but can represent anything which inspires your creative voice.

*This class meets at UrbanGlass!*