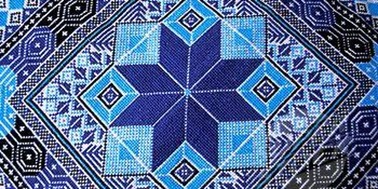 Wafa Ghnaim is an American born Palestinian businesswoman, writer and artist. Her father is from Yaffa and her mother from Safad, Palestine. Wafa began learning Palestinian embroidery from her mother when she was only two years old.

Throughout her life, Wafa has traveled alongside her mother, a master artist and life long teacher of Palestinian embroidery, for various exhibitions, lectures and demonstrations around the U.S. -- from folklore festivals in Cambridge, Massachusetts, to elementary schools in southeast Portland, Oregon. Wafa was awarded a two-year apprenticeship opportunity through  the University of Oregon in 1993 with her older sister, Fida. They assisted their mother in the completion of a traditional Palestinian thobe titled "The Gardens", which was displayed in the Oregon State Capitol as "the dress of a million stitches". Wafa also completed her own embroidered mural of the design "The Story of Cleopatra".

Wafa decided to pursue her and her mother's lifelong dream of writing a book about Palestinian embroidery designs and traditions in 2015. The book, titled "Tatreez & Tea: Embroidery and Storytelling in the Palestinian Diaspora", has been a dream of her mothers since the early 1980's when she first came to the U.S. With funding from the Clackamas County Cultural Coalition, Regional Arts & Culture Council and the Brooklyn Arts Council, the first edition of the book was digitally published  in November, 2016. With additional funding from the Brooklyn Arts Council and the Clackamas County Cultural Coalition, Tatreez & Tea will be expanded and revised in 2018.

Students will embroider the tree of life on denim, which is a bit tougher to puncture than other fabrics. In the class, students will learn pattern transferring techniques, two methods of cross-stitch, proper use of thread, threading a needle, and how to strategically place embroidery on a piece of cloth.

No experience required. All materials are provided -- but, bring your own tweezers if you have a certain set that you are most comfortable using! And, don't forget your glasses!