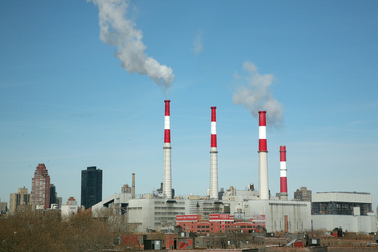 Eric Ast is a Systems Engineer (not the kind who builds things) and Economist. He's from Florida where they have few apartment buildings, lots of highways and central air conditioning. He now he lives in New York City where there are lots of apartment buildings, not as many highways, and air-conditioning comes in through your window which will always feel strange to him. He now works in New York City consulting apartment-building owners on energy and water conservation.

This course is meant to give everybody a little taste of each part of the ridiculous energy system that keeps electricity, gas, water, steam and probably other things you don't know about flowing into our apartment buildings.

The system is a doosy, spanning the forefront of science in renewable energies, convoluted economic bidding systems and 19th century monopolies. At one point in New York City, every building that wanted electricity had its own little power plant in the basement. A lot of those buildings caught fire and burned down, which, in hindsight, makes Con Ed not seem so bad.

You'll walk out of the class with a better understanding of, among other things:

-Basics of building science (think boiler rooms, drafty windows), some energy-saving and comfort-increasing tips, and insight regarding how most New York City apartment buildings are able to pull off the incredible trick of making you uncomfortably hot in both the winter and summer!

-The economic structure specific to our fair city (these vary wildly by state, even cities across the country), and why every time you go to an outdoor event somebody tries to get you to ditch Con Ed and buy power from a windmill.

-New York City's energy past, present and future, including PlaNYC 2030, New York's ambitious agenda to create a more sustainable city. Probably with slides and a chalkboard and not Dickensian ghosts.

-The industries sexiest topic – renewables and alternative fuels. We’ll touch on wind, solar, biomass, landfill reclamation, molten salt and nuclear energy, what exactly they are, how they're used in the city and their pros and cons.