New York: City of the Dead 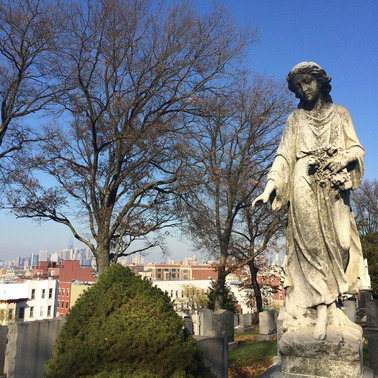 Allison C. Meier is a writer specializing in contemporary visual arts and overlooked history, and is also an amateur cemetery historian and tour guide. Originally from Oklahoma, she spent time in the south of France before relocating to New York and is now based in Brooklyn. Find more about her here: allisoncmeier.com

New York City is dense with the dead. From the sprawling acres of Green-Wood in Brooklyn and Woodlawn in the Bronx, to the hidden urban corners of the New York Marble Cemetery in the East Village and Trinity Church Cemetery on Wall Street, the eternal New Yorkers are a silent, but considerable, population. But much more than just places of morbid curiosity, the cemeteries of New York City are cross sections of the city's history, and are the final homes of its most significant citizens.

This one-session class will give an overview of the evolution of cemeteries in New York City, their place in its history, as well as a look into some of the "secret" cemeteries hidden all around us. (For example, did you know there is a potters field under Washington Square and a Quaker Cemetery in Prospect Park?)

This is a classroom session and not a walking tour.