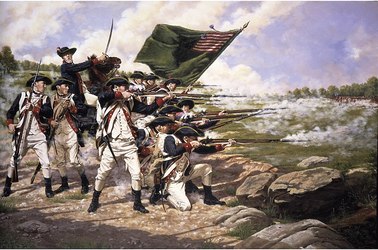 Boston, Philadelphia, Yorktown… these are the places that usually star in the American Revolution, but New York City has a story to tell as well! NYC was burned, abandoned, repopulated, and put under martial law; it became home to pirates, runaway slaves, and smugglers; its churches were turned into hospitals, its warehouses into jails, and its cemeteries into pleasure gardens. Even our rivers played a part, allowing us to be surrounded with fireships, floating pens for prisoners of war, and, briefly, the French navy. The British occupied NYC for seven years, longer than any other part of what would soon become the United States. It was also the last place they left, not until over two years after their ‘final’ defeat.

New York City during the American Revolution is the story of people like William Franklin, Ben’s illegitimate and disgraced son; Colonel Tye, a black raider who led a feared guerrilla force; and Haym Salomon, a Jewish Polish immigrant who used his language skills to spy for George Washington.

You think you know the American Revolution? Think again! Not all history happens on the battlefield – though we have one of those, too. The Battle of Brooklyn was the largest military engagement of the entire war. Come learn about the archaeology and history of New York City in the American Revolution. Whether you’ve already seen Hamilton or couldn’t afford tickets, this is the class for you.