Murder, Theft, and Rebellion: Archaeology of Pirates of the Caribbean - ONLINE CLASS 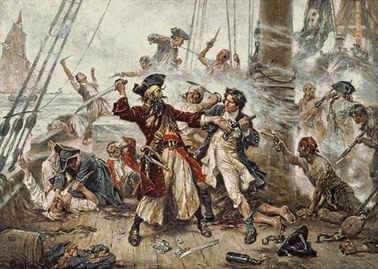 *This class will be meeting virtually via Google Meet or Zoom. Please familiarize yourself with Zoom and download the mobile/desktop app at zoom.us in advance. (You'll probably need it anyway!)*

Everybody knows all about pirates, right? After all, you’ve seen them in movies, tv shows, and novels. And you’ve probably heard the names of Blackbeard, Captain Kidd, Anne Bonny, and Henry Morgan. But how much of what you know is accurate? Today, archaeology is helping to reveal the true story of the Golden Age of Piracy by excavating shipwrecks, hideouts, and even the drowned city of Port Royal (sunk beneath the ocean during an earthquake in 1692).

Piracy in the Caribbean was at its peak from 1650 to 1726. The pirates of this period didn’t just attack ships and bury treasure (though they did that too!), they also besieged entire cities, experimented with democracy, led rebellions, formed unions, had multiracial crews, and spread trade. They were some of the first people to bring together the entire globe, connecting the Caribbean to places as far apart as New York City, England, Madagascar, and India.

This class will show you a picture of the pirate’s life that’s far more complicated – and more interesting – than a chest of gold and a bottle of rum. Come aboard, me hearties!