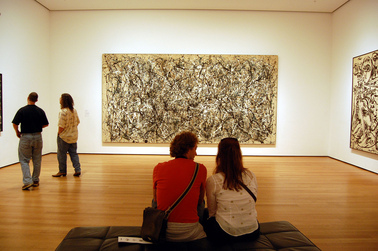 Andrew Ondrejcak is a writer, director, and production designer. Since 2003, Andrew has been a freelance lecturer for many cultural institutions, including the New York Foundation for Architecture and the Museum of Modern Art. This summer, he will teach a new design course “Design in Performance” at Domaine de Boisbuchet. His creative work has been published internationally and his last performance piece was presented at the Guggenheim Museum as curated by Robert Wilson.

In this two-week primer, we'll explore Modernism in art, tracing its development from turn-of-the-century Europe to its eventual culmination fifty years later in post-war America.

In week one, we'll examing the foundations of Modernsim, beginning with Paul Cezanne, often referred to as the "Father of Modernism," and the Futurists, who embraced technology and the machine age and applied to to art forms of all sorts.

In session two, we'll travel across the ocean and see the ways Modernism changed on these shores after World War II, looking specifically at American painting and sculpture.