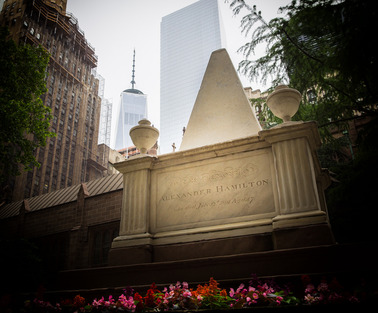 James is just this guy, y'know?  Humble, intelligent, charming. Eyes a color you don't know the name for. He'll take you for a bike ride with his company Albert and James in the morning, play a board game with you with his board game group Victory Pints in the evening and then prattle on about D&D and cocktails at night. Only in the morning will you realize that it was all a ploy and your jewels are no longer in the safe. Instead there's a note so beautifully written that the police officer who collects 'it' as evidence breaks downs in tears. You sob with him as the neighborhood wakes up around you.

When it comes to historical neighborhoods in New York they don’t get much more older than Lower Manhattan. Join us for a two-hour walk through the Financial District where we’ll learn about some of it’s most famous landmarks. We’ll see Alexander Hamilton’s gravesite, talk about the actual wall of Wall Street, and walk the oldest streets of Manhattan dating back to the very beginnings of New York City.

In addition to seeing it’s more well-known attractions we’ll also point some more hidden stuff including secret ciphers on tombstones, blast marks from 1920s terrorism and where to find fragments of George Washington’s teeth. You’ll learn where Donald Trump’s grandfather first set foot on American soil, how a statue changed its nationality, and what a simple black fence has to do with the turmoil of the Revolutionary War.

This walk will meet in Lower Manhattan near the National Museum of the American Indian. Exact meeting location will be sent the day before the walk.