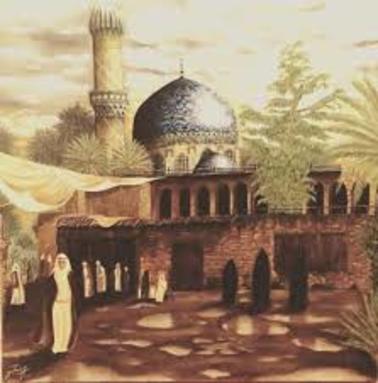 Victoria Flexner is the Founder of Edible History, a Brooklyn-based historical supper club, research lab and test kitchen. A born and raised New Yorker and Medieval History nerd, she’s engaged on a life long quest to bring the past to life through the history of food.

In the year 786 Harun al-Rashid was Caliph of the Islamic Empire. Famously known as the prince from 1,000 Nights, this was the Golden Age of Islam. The empire stretched from the edges of India to the borders of Europe. Baghdad was the heart of the Islamic world and the center of political rule. It was also the center of the Translation Movement, when scholars from around the world came together at the House of Wisdom in Baghdad, translating ancient Greek and Roman texts on subjects like algebra, medicine, and astronomy. Music, poetry and art flourished. The society of the Abbasid Caliphate was diverse and open.

But Harun and the Abbasid family’s rise to power was far from peaceful. The overthrow of the Umayyad Caliphate had far reaching and unintended consequences. Palace politics were deeply complicated and warring factions had to calculate each move very carefully...reprisals could be brutal (and one can’t help but wonder if they served as the inspiration for some of George R.R. Martin’s most epic Game of Thrones scenes).

We’ll dive into this spectacular period of Islamic history - exploring the politics of the Empire, the culture of Medieval Baghdad, the kind of food that was eaten (did people drink alcohol?), the incredible intellectual achievements of the Translation Movement and all the drama of the palace and the harem. Consider this your crash course on life in Medieval Baghdad.