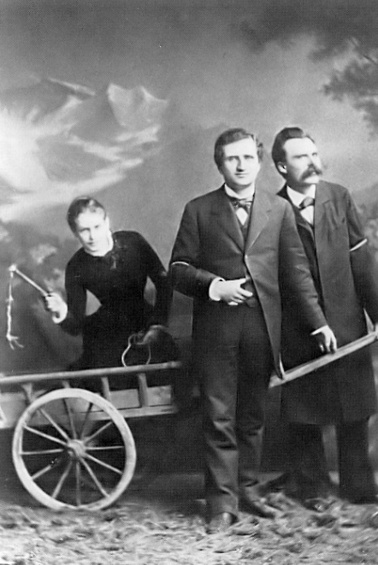 Allyson Rudolph graduated from Colby College in 2007 with honors in philosophy and, although her day job does not emphasize philosophical inquiry, she continues to listen to philosophy podcasts, read philosophy books, and get really excited when anyone in her Twitter feed mentions Dasein.

This is a class for anyone who used white-out to write GOD IS DEAD on their Trapper Keeper in school, has seen a lot of Woody Allen movies, or is all too familiar with anxiety, alienation, nihilism, absurdity, and dread.

We’ll start by going over the history of existential thought, define some key terms, and then explore five important existential philosophers in an attempt to answer questions about what it means to exist in the world.

*Søren Kierkegaard's Fear and Trembling, in which a lovestruck Dane retells the Old Testament story of Abraham and Isaac five times and eventually hits on fundamental truths about faith

*Friedrich Nietzche’s entire body of work, in which a curmudgeonly loner inspires legions of disaffected and intellectually precocious teenagers to embrace nihilism and affect an attitude of superiority over the cool kids

*Jean-Paul Sartre’s Being and Nothingness, in which Simone de Beauvoir’s boyfriend attempts to negate his self for the greater good

*Frantz Fanon’s Black Skin, White Masks, in which an Algerian revolutionary takes the experience of blackness for an existential spin

*Nagarjuna’s Fundamental Wisdom of the Middle Way, in which a Buddhist saint, as translated by Uma Thurman’s dad, uses Tibetan poetry to offer an alternative to nihilism way before Nietzsche was even born