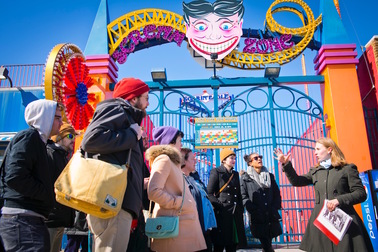 Taught by The History Couple

Jonathan and Alex are THE HISTORY COUPLE, and they have been giving tours in NYC since 2014, sharing the stories they love and bringing history to life.

Their love story began in NYC in 2012 when they met as actors and fell in love playing opposite one another in William Shakespeare’s comedy “As You Like It.” Inseparable since then, they have continued to inspire one another to pursue their mutual passion for education and history. They developed THE HISTORY COUPLE and its series of tours out of their passion to make the history of NYC come alive in engaging and entertaining ways.

Alex and Jonathan have backgrounds in theater and education, which makes every tour with THE HISTORY COUPLE a thought-provoking, engaging and fun experience.  They love to hear your questions and ideas which makes every tour unique. THE HISTORY COUPLE keeps all tour groups small so that each visitor feels comfortable, at ease, and invited to participate.”

Alex:
Alex grew up the daughter of a diplomat, always moving from one country to another but found her home in Brooklyn. She moved to NYC in 2006 and found that the city fueled her passion for history, education and storytelling. Alex decided to start her own business with her husband, Jonathan, out of their mutual love for the city and sharing its stories together.

Alex has a Master’s degree in History from Brooklyn College and is a Certified NYC Sightseeing Guide. Her background in Universal Design Learning (UDL), differentiated learning and facilitation helps her to create tours that are specialized to every patron. When she is not running THE HISTORY COUPLE, you can find her at New York City Children’s Theater (NYCCT) where she works as their Education Associate. Alex is a leading member of the education department and brings theater and music to classrooms, community centers, and homeless shelters in all five boroughs of NYC. Alex assists in building relationships with new partners for programming and creates new curricula to meet the needs of every student in the classroom. She is also a Steering Committee Member of the Museum, Arts and Culture Access Consortium (MAC) which is dedicated to accessibility and inclusivity for all. Before NYCCT, Alex was an Education Specialist at the National September 11 Memorial & Museum in which she created programming for schools and families. Previously, she was also a Senior Educator and Costumed Interpreter at the Lower East Side Tenement Museum where she learned how to tell textured stories of immigration history as both a teacher and as an actress. Alex also holds a BA in Theater from Sarah Lawrence College.

Jonathan:
Jonathan is a native of Bar Harbor, which is located on an island off the coast of Maine. He had never imagined that New York would ever be a place he would live, but the stars aligned, and now here he is, loving every minute of it. Jonathan has been living in Brooklyn since 2012 and his love for history has only grown in that time. He decided to start his own walking tour business with his wife, Alex, out of their shared love for New York and its incredible history.

Jonathan holds a Master's degree in History from Brooklyn College, and is a Certified NYC Sightseeing Guide. His Master's thesis was on Coney Island's obsession with staging large-scale disasters in the early twentieth century (spoiler alert!). When not giving tours for their business, he is the Director of Education at Edge Studio, a facility that offers the most comprehensive training program in the world of professional voice over. Jonathan is responsible for the creation of new curricula, and supports voice over coaches on staff to help students of all abilities thrive. Prior to Edge Studio, he was the Manager of Education at the South Street Seaport Museum, where he created new programming for school groups K-12, developed events for families and also went sailing from time to time, but was terrible at it. Before the South Street Seaport Museum, Jonathan worked as a Senior Educator at the New-York Historical Society and as a Costumed Interpreter at the New York Transit Museum, inspiring NYC public school children to learn more about their incredible city. He also holds a BA in Theater from St. Michael’s College.

The history of Coney Island is like nothing you’ve ever heard before. On this tour, you will discover a giant elephant-shaped hotel, hear about the invention of the hot dog, and even see a ride that was so scary it made its riders pee themselves! We’ll explore the engaging history of Coney Island’s amusement zone: a story of crime, passion, and fire that will change the way you see the “People’s Playground” forever.

So, come on down to New York City’s most famous beach where millions of people escape the summer heat. The tour meets at the Pizzeria at 1215 Surf Avenue in Coney Island.

The History Couple is run by Jonathan Anderson and Alex Delare and they are fully vaccinated. Jonathan and Alex will be wearing masks on the tour to keep everyone safe and serve as a reminder to all members of the tour group to wear masks as well. They will be using a voice amplifier to project their voices so there will be no need to stand too close to one another. We ask that members of the tour group remain respectful of each other, be mindful of space, and wear masks on tours.