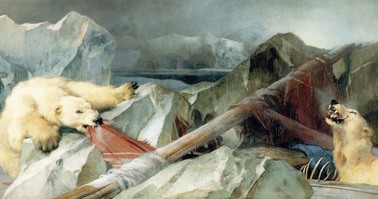 As winter approaches, prepare for cold weather with this chilling true story that took place not far from the North Pole, on Canada’s iciest oceans.

In 1845, Captain John Franklin left England with two ships. They were equipped with the latest technology – steam engines and canned food – and specially designed to survive the cold, with iron plates and rudders to prevent them from being crushed by icebergs. But despite these precautions, no one from the Franklin expedition ever returned to England.

For many years, despite numerous search teams, no one knew exactly what had happened to Franklin and his ships. Only recently has archaeology enabled us to dig beneath the ice and snow. Hidden messages have been found and bodies of crew members recovered and studied. Finally, in 2014 and 2016, the missing ships themselves were located, still in pristine condition despite resting on the bottom of the ocean.

The story of the Franklin Expedition has fascinated people for over a century and been the subject of much speculation, including the AMC miniseries The Terror. In this class, you’ll uncover the frozen secrets of a mission meant to explore the far north.