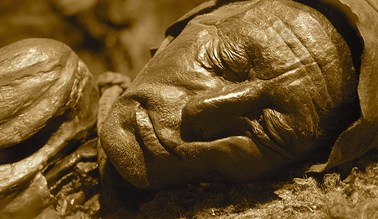 “Bog bodies”: the eerily well-preserved remains of hundreds of people – men, women, and children – found in the swamps and peaty wetlands of northern Europe. Many times police have been called to what appears to be a modern murder scene, only to discover that the body dates back to the Iron Age, over two thousand years ago. The incredible protection provided by the bogs may be frightening for people who stumble across them, but it means modern archaeologists are able to reconstruct a great deal about these ancient dead. We know how they lived their lives, what they looked like, and even what they ate for their last meal.

One startling thing archaeologists have learned is that most of the bog bodies died violently before their burials hidden beneath the peat. Roman writers claimed this practice was a way of executing criminals and adulteresses. Medieval explorers thought they were the remains of legendary kings and queens who were betrayed by their followers. Others believe these people were human sacrifices to the gods of fertility and good luck.

In this class, we’ll discuss who the bog bodies were during life, how they died, and the science behind their amazing preservation.