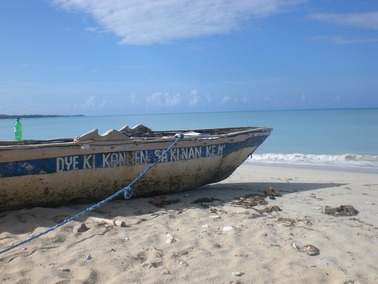 Wynnie learned English as a second language and speaks English with a generic American English accent. She self indentifies as a language junkie and has fed her addiction to language with a degree in Linguistics and Spanish. As a Haitian-American living in Brooklyn, she enjoys doing things that demonstrate her bi-cultural nature -- from cooking traditional Haitian food like akra and bannann pize to enjoying a ballgame at Yankee stadium.

You might already know lots of facts and stats about Haiti, and you've probably donated to the earthquake relief efforts, but what do you really know about this small island nation whose population is approximately the size of NYC?

Using language as our medium, we will uncover some of Haiti's best kept secrets. Going beyond the negative media portrayal of Haiti, we'll learn about Haiti's rich culture and history.

Class sessions will include lessons on Haitian Creole with a focus on structure, sound and vocabulary. By the end of three sessions, participants will know basic Haitian Creole phrases, be able to order comfortably at a Haitian restaurant and understand what it means to be Haitian in the 21st Century.