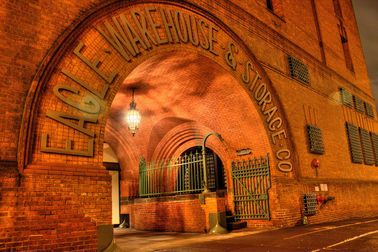 So you live in New York. Or maybe you're just passing through. Guide books direct your attention to The Empire State Building, The Chrysler Building, Grand Central Station. Great buildings, all of them. No doubt. World class historically important architectural masterpieces that people from all over the world come to see and experience for themselves.

But wouldn't it be cool if, for example, while you're waiting on line for pizza at Grimaldi's in Dumbo with your out-of -town friend, you glance across the street and point out the incredible building facing you. You point out its monumental arch, unique brass lettering and incredibly thick masonry walls. You're able to explain how it was originally used as a storage facility for the rich. That it was designed by probably the greatest Brooklyn architect of his time, but who few people actually have ever heard of. Wouldn't that be cool?

This class will look at a bunch of these types of buildings. Buildings that you might pass without noticing, but which have their own rich history and significance in the New York City architectural vernacular. Buildings that make New York, well....New York. We'll discuss the when and the why. The who and the "so what". We'll discuss their place in New York architectural history as well as their place in American Architectural history in general.

So the next time your parents come to visit for the um-teenth time, instead of waiting in line for a tour of the New York Public Library, you'll be able to drag them deep into Brooklyn, or Chelsea, or the Bronx to show them some real New York architecture that few guides or guide books would ever mention.

This is a classroom session, not a walking tour!