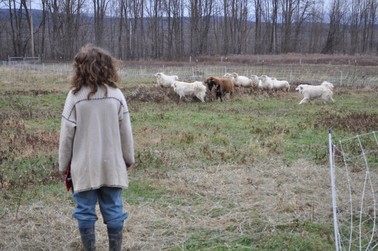 Stephanie spent her senior year at NYU’s Gallatin school researching and interviewing women farmers across New York state.  As an aspiring farmer, her post-graduate life consists of baking, crafting, writing, and filling her Brooklyn apartment with as much green life as possible. Check out her blog and other farm women resources at www.legumeloyalist.com.

According to the most recent Census of Agriculture, women farmers are on the rise, joining farms in greater numbers than any other demographic. However, women on farms is nothing new. This statistical rise is due to innovations in the way that the census collects its data on farmers, obscuring women’s historical participation on farms.

We’ll begin with a history of women on farms, from the homesteading era of the late 19th century to the present day. We’ll look at the role of women farmers in the development of the industrialized food system, and discuss their role in the current sustainable food movement, both as advocates and critics.

We’ll also explore what constitutes “farming” and “farmer” in America, and what it means to be a woman farmer. We’ll even take a look at “urban farming” here in New York City, and how this system differs from “farming” in, for example, Nebraska.

I'm incredibly passionate about women farmers, and would love to share what I know and hear what you have to say! Whether you’re a woman farmer, an enthusiastic agriculture nerd, or find yourself with only a fleeting interest in anything farm-related, you’ll hopefully walk away with a refreshed notion of women farmers, as well as resources for further reading.

Not required, but if you’re new to the game and want a bit of pre-reading, check out these two articles on women farmers and urban farming (featuring some women farmers from right here in NYC!).

From the New York Times: "Out of the Kitchen, Into the Field"

From New York Magazine: "What an Urban Farmer Looks Like"