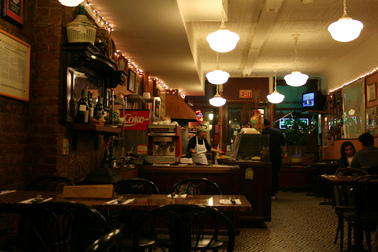 Victoria Flexner is the Founder of Edible History, a Brooklyn-based historical supper club, research lab and test kitchen. A born and raised New Yorker and Medieval History nerd, she’s engaged on a life long quest to bring the past to life through the history of food.

New York City is home to thousands of restaurants. Indulging in fine dining, sampling the latest food craze, grabbing a bite on the go – one thing is for certain, New Yorkers love their restaurants.

Though it may be hard to imagine given the city’s modern food scene, early 19th century New York was a culinary desert (though certainly not due to any sort of food shortage). The city was still a small town in many ways, with a population of just 60,000 people and city limits that did not extend beyond 14th Street. Over the course of the century New York would become one of the biggest cities in the world: a commercial hub, a cultural melting pot and a fine dining destination.

It was the events of the 19th century that led to this dining boom and the creation of a national culinary identity. Immigration, housing issues, evolving gender roles, the city’s expansion northwards and America’s expansion westwards were all catalysts in the creation of the cultural space that is now an institution of city life: The Restaurant.