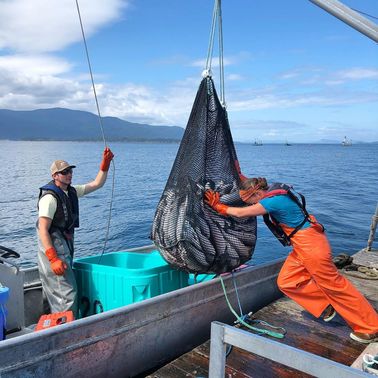 This lecture series is a semi-secret preview of Sarah Lohman’s upcoming food history book, Endangered Eating: Exploring America’s Vanishing Food! Over the coming months, she’ll lead eight classes, each focused on a single chapter of her book. It’s your chance to get the scoop on Sarah’s work, help her with questions and feedback, and learn a curious story about America’s food past! Samples are included in this lecture.

In Salish Sea, north of Puget Sound, an ancient, indigenous fishing technique is being preserved. When “reefnet fishing,” a spotter looks for a school of fish then a net is raised in the water between two floating platforms, trapping the salmon in a “well.” The salmon are hauled on the platform by hand, and then kept in a live-well. This method keeps the fish calm, which ultimately results in a sweeter flavor and allows the fishermen to easily separate protected fish, unharmed. This technique is being preserved in Washington by the Lummi Island Wild Co-op, and I spent several days with them, catching, killing and sorting pink salmon until my hands swelled from the labor. I also jumped on board the first indegenious-run fishing gear on the water in over a century.

But the salmon this fisheries catch are disappearing, and as a result, so are the animals that eat them, like orca whales. Reefnet fishing is being proposed as a sustainable fishing method, in opposition to trolling. I’ll bring you along on the twists and turns as I follow the investigations into why the salmon are vanishing, and if reefnet is the answer.