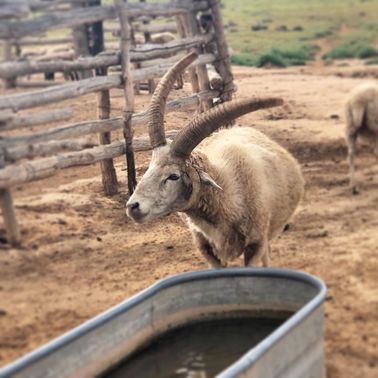 This lecture series is a semi-secret preview of Sarah Lohman’s upcoming food history book, Endangered Eating: Exploring America’s Vanishing Food! Over the coming months, she’ll lead eight classes, each focused on a single chapter of her book. It’s your chance to get the scoop on Sarah’s work, help her with questions and feedback, and learn a curious story about America’s food past

When Europeans first began settling Northern Mexico, they found the terrain inhospitable for most familiar crops – but ideal as a grazing ground for livestock. Navajo-Churro sheep are descended from a traditional Spanish breed introduced to America in the 16th century and sport up to four corkscrew horns. The sheep became a favorite of the Diné/Navajo, who prized them for meat, milk, and fleece. The decline of the Navajo-Churro sheep began in the 1860s when the Navajo were declared enemies of the US government and Kit Carson was sent in 1863 to round up the Diné people, destroy their livestock, and burn their orchards and crops. The sheep breed has never fully recovered, although the Diné still maintain their deep, spiritual connection the animal.

I traveled to the Navajo Nation, and spent a weekend assisting a Diné cook slaughter, butcher and cook a whole lamb. Then, I spent several days sleeping in my truck on the ranch of a Diné shepherd, before finally heading in to Arizona to eat Churro in a fancy restaurant. It was a hell of a trip, and I’m going to tell you all about it.