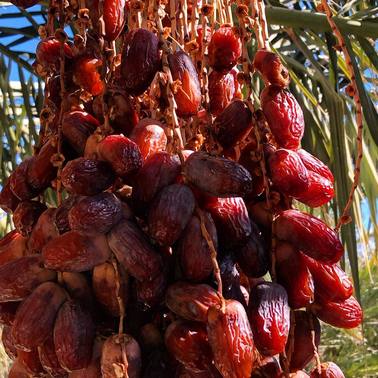 This lecture series is a semi-secret preview of Sarah Lohman’s upcoming food history book, Endangered Eating: Exploring America’s Vanishing Food! Over the coming months, she’ll lead eight classes, each focused on a single chapter of her book. It’s your chance to get the scoop on Sarah’s work, help her with questions and feedback, and learn a curious story about America’s food past! Samples are included in this lecture.

This month, Sarah will bring you the story of Coachella Valley’s Date Palms. Today the area is better known for an epic music festival, but in the 19th century it was an agricultural paradise made to mimic the Middle East. In the early 20th century, the USDA sent agents abroad to collect plant specimens – notably, David Fairchild, who sent back hundreds of species of plants, including dates from the markets of Baghdad. As dates were planted in Coachella, and the date industry brought money to the region, cities were named “Mecca” and sports mascots “The Arabs.” In 1947, the Date Festival became an annual event celebrating the connection between California and the Middle East.

But, starting in the late 1970s, political events sullied the relationship between America and the Middle East. With this shift in culture, the Coachella valley became less popular, and so did its Middle Eastern products. Now the date varieties grown in this area are becoming rare.

Travel with me to Coachella, forgoing concerts for the Date Festival, to search for remnants of this American Middle East.