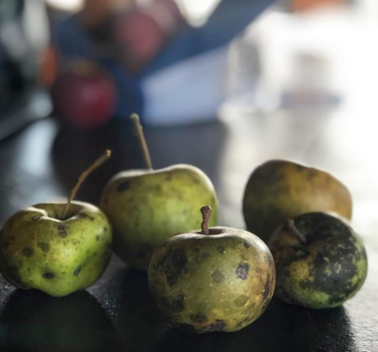 This lecture series is a semi-secret preview of Sarah Lohman’s upcoming food history book, Endangered Eating: Exploring America’s Vanishing Food! Over the coming months, she’ll lead eight classes, each focused on a single chapter of her book. It’s your chance to get the scoop on Sarah’s work, help her with questions and feedback, and learn a curious story about America’s food past!

Most Americans would be surprised to learn that a common New England crop, apples, have been called the country’s “most endangered food.” Currently, 86% of apple varieties grown in the US have vanished, and four out of five are on the brink of extinction. Many of these apple varieties are not “dessert apples” like Red Delicious, but traditional cider apples. Often bumpy, brown, and tannic these apples didn’t have the appeal to succeed in a modern grocery store. Additionally, during Prohibition, apple trees were cut down by supporters of the Temperance movement as a showy conquest over America’s alcoholic heritage.

We'll explore the historical characters that brought good cider to America and the contemporary cider makers who hope to preserve endangered apples by reviving historical ciders. I'll also share my travels across the country on the hunt for rare apples, including a once famous New Jersey apple that was considered extinct until it's 2018 rediscovery in an abandoned 19th century orchard. And we'll taste several ciders made from rare, historical apples!