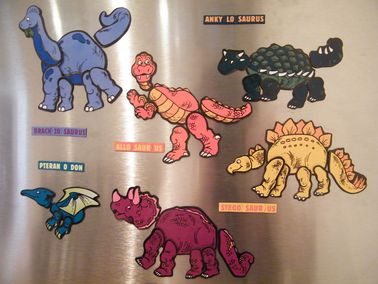 Lauren loves Dinosaurs, Lincoln, running, and the Internet. A Ruby programmer by day, she got her start writing piles upon piles of SQL. Even though Ruby on Rails gives her a much prettier interface, she still prefers to write her SQL directly, to keep things speedy and neat. Outside of her programming life, her favorite dinosaur is the Chasmosaurus (the namesake of the blog, "Love in the Time of Chasmosaurs"), followed closely by the Nigersaurus and Rugops. Every year, she celebrates Lincoln's birthday with civil war food, a top hat, and a toast. When not talking about Lincoln or Dinosaurs, she is an enthusiastic lover of the Internet, and enjoys (literally) running around the city and taking courses in anything and everything.

Everybody remembers their favorite dinosaurs as children - T-Rex, Brontosaurus, Triceratops - but were these dinosaurs everything they told us they were in elementary school? Not quite. For starters, Brontosaurus never existed, there's quite a bit of controversy around Triceratops, and T-Rex probably didn't have teeth that stuck out over his bottom lip.

Learn about the greatest dinosaurs of all time, and the greatest hoaxes, misinformation, and scandals of paleontology. This class will introduce the most popular dinosaurs, paleontology's initial understanding of these dinosaurs, and how we learned we were wrong. It will cover the greatest fights, the bone wars, the debunking of brontosaurus, the threat to triceratops, and why museums everywhere are rebuilding their dinosaur skeletons to reflect newer research.

Finally, we'll talk about some newer bone discoveries, current controversies in paleontology, and dinosaurs that are frankly just bizarre looking.

This class, like all the rest, takes place at the Brainery space at the corner of W. 9th and Court in Carroll Gardens.