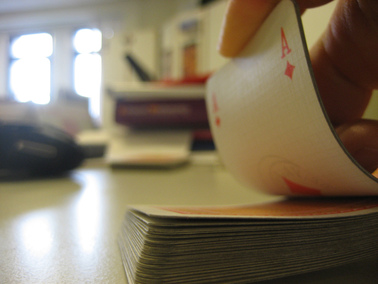 Taught by Zach and Blake

Zach is a writer and musician in New York City. He plays drums in Flaming Tusk, a metal band from Astoria, Queens, and spends much of his free time trying to convince his friends to play card games with names that nobody can pronounce.

Blake spends most of his time working, and slightly less of his time not really having any hobbies of note (mostly listening to podcasts and fantasizing about playing professional basketball). For the past four years he's played a weekly card game with Zach, having been successfully convinced to play games with names that he cannot pronounce.

For many, the world of playing cards is limited to a handful of games like poker or blackjack, leading some to see card playing as a stale, even boring pastime.

What this 2-week course hopes to provide is a general knowledge of a much wider world of traditional card games, played across the world, that feature new and interesting styles of play. Each class will focus on a single game that you might not have heard of, each featuring a loose structure for socializing and good conversation. We'll learn the rules and sit down to play the game.

The first week we'll learn how to play Bela, a trick-taking game, in the family of Spades, Hearts, or Bridge, that has variants played all across Europe. The second week we'll learn the Italian game Scopa, which falls under the fishing family (any similarity to Go Fish is purely coincidental, we promise).

During the class, we'll establish some knowledge of the common patterns and styles in the world beyond Poker, that should give you a curiosity and ability to pick up new games in the future. 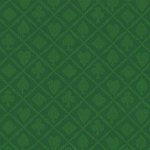 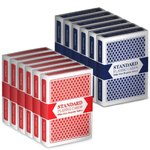