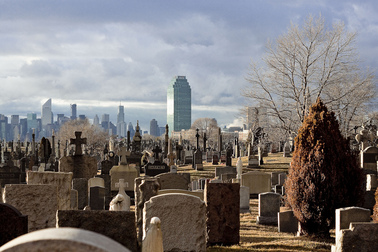 Join Newtown Creek Alliance Historian Mitch Waxman for a walk amongst the 300 year-old headstones of the colonial-era Alsop cemetery, in the neighborhood that was once known as Laurel Hill, Queens.

Calvary Cemetery, founded in 1848 by Roman Catholic Archbishop "Dagger" John Hughes, sits atop what was once the Alsop Farm in Newtown's Blissville. First Calvary is the final resting place of senators, governors, businessmen, mafiosos, even an heir to the throne of Ireland. See the memorial to NYC's Civil War soldiers erected by Tammany Hall, and one dedicated to the "fighting 69th".

The walk will range throughout rolling hills of the cemetery. Its expanse of open space is a jewel of green infrastructure nestled in the midst of Newtown Creek's industrial zone. In addition to its original purpose, Calvary also serves the City of New York by soaking up billions of gallons of water during storms.

The views from Calvary Cemetery are iconic, with the Manhattan and LIC skylines framing the scene, so bring a camera. We will be walking across a natural surface of grass and soil, so if your mobility is limited, this might not be the tour for you.

Meetup at the north east corner of Greenpoint and Review Avenues. Map: https://goo.gl/maps/DbSEZ2N68Wp nearby the Greenpoint Avenue Bridge in Blissville. We will be exiting the Cemetery through the main gates at Greenpoint and Gale Avenue, nearby Borden Avenue and the Long Island Expressway.

Dress and pack appropriately for hiking and the weather. Closed-toe shoes are highly recommended. Bathroom opportunities will be found only at the end of the walk. We will be outside until the very end of the tour, which will run about two hours.