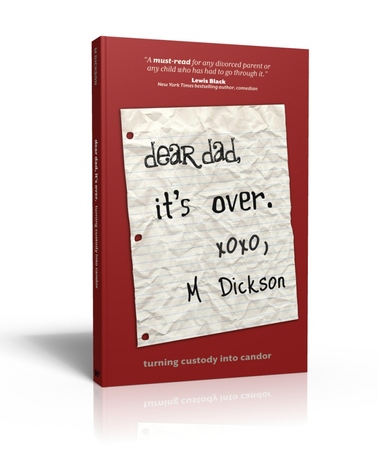 M Dickson is a nationally touring stand-up comic and author with an Amazon best-selling memoir that was called "a must read" by Lewis Black. She's obsessed with the Muppets and murder. But not together. Never together.

Come join comedian M. Dickson as we celebrate the launch of her memoir Dear Dad, It's Over (Wyatt-MacKenzie, 2012) -- a book Lewis Black has already called "a must read". She'll share excerpts, host an informal Q & A and even give away an autographed copy or two.

Raw, gripping and painfully funny. Comedian M Dickson's memoir makes no bones about burning bridges. As the divorce rate soars, custody battles fill the family courts and homes divide, it seems that everyone is writing a book. There are ones written by therapists and lawyers, fathers and mothers, distant relatives and nosy neighbors... but until now no one has ever written such a hilarious and heartfelt account from the child's perspective. Dear Dad, It's Over tells the very specific, but universally relatable, story of Dickson's decision to end her toxic relationship with her divorced dad nearly twenty years after her parents' split. M Dickson turns custody into candor one page at a time in this vulnerable debut.