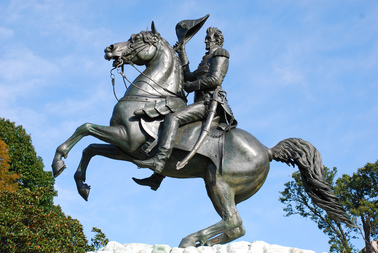 Ah, Andrew Jackson - that duel-fighting, Indian-removing, national-bank-vetoing rabble rouser who worked his way up from backwoods poverty to adorn our beloved $20 bill. . . . His opponents
claimed he was a semi-literate demagogue, ushering in the disastrous reign of King Mob. But to his supporters, he was the political and intellectual heir of Thomas Jefferson, extending the promise of democracy to the common folk (who trampled the White House to celebrate his inauguration). As one of his contemporaries put it, "The republic has degenerated into a democracy."

In this class, we'll talk a bit about the man himself-one of our more colorful presidents-and a bit about the 1830s, which was quite a turbulent time (religious revivals, radical abolitionists, women speaking in public!) And we'll talk about the idea of Jacksonian democracy and the still-relevant questions it raises about representation, equality, popular sovereignty, and the "tyranny of the majority."