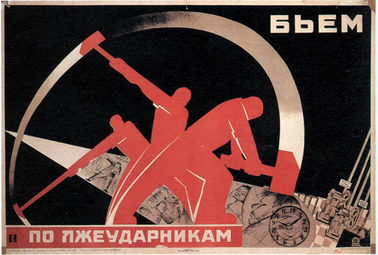 Nick is a PhD candidate studying political theory at CUNY, with a BA and an MA in European history and Holocaust & Genocide Studies (he’s lots of fun at parties). An incorrigible nerd and bookworm, he’s interested in just about everything.

Agitprop was the supreme political art form of the 20th century, the one that most totally captured the chaos and upheaval of an age of extremes. Ranging from revolutionary Russia to Hitler’s Germany, from the battlefields of Spain’s civil war to New Deal America, Agitprop! dives into the topsy-turvy universe of political propaganda, where truth is relative, hatred is cultivated, and dictators become gods.

We’ll look at propaganda as art, as ideology, and as history, concentrating on some of the revolutionary regimes of the early 20th century that tried to build new civilizations on the ruins of their predecessors.

There will be lots and lots of fascinating images to dissect and discuss (and occasionally laugh at), as well as many strange, quirky, and appalling detours into the dark political passions of the 20th century.