A History of New York City Transportation - From Horsecars to Helicopters 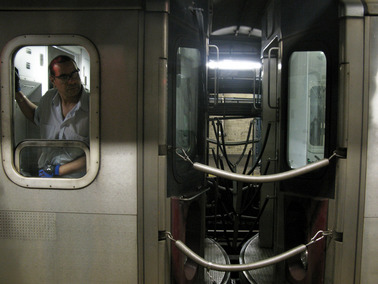 Patrick Lamson-Hall is an urban planner and a research scholar at the NYU Stern Urbanization Project. He has contributed to the development of the Atlas of Urban Expansion: 2016 Edition, a groundbreaking and original study of the dynamics of global urban growth. He manages the India Urban Expansion Observatory, a 30-person research facility located in Mumbai, India. He is also the New York-based coordinator of the Ethiopia Urban Expansion Initiative, a project to implement long-term spatial plans in 16 Ethiopian cities. He coordinates the Climate Smart Cities: Grenada program, a collaboration with the Green Climate Fund.

Mr. Lamson-Hall holds a Master’s Degree in Urban Planning from the NYU Wagner School of Public Service and is currently a PhD candidate at the Wagner School. In addition to his work at NYU, he has contributed to the crafting of the sustainable development goals as an expert urban planner, has collaborated with UN-Habitat on the writing of a methodology for the assessment of public open space, and has shaped new strategies for the evaluation of cities using high-resolution satellite imagery. His other research interests include alternative transportation, special economic zones, and the measurement of urban density. He is from Eugene, Oregon and now lives in Newark, New Jersey.

By some estimates, for every New Yorker you see walking around on the streets, there’s one New Yorker underground, riding the train. That’s right - 1/2 of New York’s population is on some form of public transportation at any given moment.

This miraculous statistic means that the city we know truly couldn’t exist without its subways, buses, and taxis, but how did all this heavy, stinky, old-fashioned infrastructure get built?

This class covers NYC transportation from the early days, when the best you could hope for was a mud-spattered omnibus ride, through the first steam-powered elevated railroads, all the way up to the Pan Am building helicopter shuttle. It also touches on the many ambitious, zany, quixotic efforts to get us from Point A to Point B. Have you ever been sucked through a tunnel?